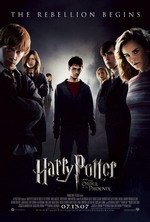 With the release of the final Harry Potter book coming at the end of next week, there’s a strange sense that we’re about to lose something great–that the last book will leave us wanting more, even though it will likely end on the perfect note if author J.K. Rowling’s track record has anything to say about it. The books have been so good, and so voraciously consumed by their readers, that it’s going to leave a large void to fill after reading the final page of the seventh book. Well, fret not, because we’ve still got three more Harry Potter flicks to go, which thus far have provided just as much enjoyment as the books, and the fifth entry in the film version of the mega-franchise is no exception.

Order of the Phoenix continues the progression of the franchise into a more “adult” world, which makes sense when you figure the young audiences that saw the first film are growing right along with Harry and the actors who play the beloved characters. The three primaries (Radcliffe, Watson, and Grint) all appear very comfortable in their roles, and the chemistry between them helps immeasurably in conveying a convincing picture of three best friends willing to do anything for one another. 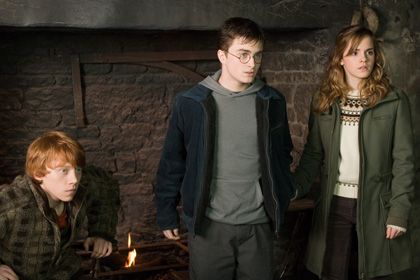 The rest of the acting is all excellent, as I’m now fully accustomed to expecting. Imelda Staunton is great as Umbridge, just oozing a loathing, near-evil arrogance that makes you want to throw her off a cliff (figuratively-speaking, of course). As good as Michael Gambon has been as Dumbledore, I still feel some melancholy that Richard Harris is no longer with us to play the role. He struck a finer balance between the great power the wizard holds and the wise, friendly countenance he displayed in watching over Harry. Gambon is great, don’t get me wrong, but Harris was simply perfect.

And in this story, with adulthood comes darker themes of conflict, particularly with Harry against Voldemort. David Yates’ direction is more about establishing mood and atmosphere than it is highlighting actions or the carefree attitudes of schoolchildren. He zeroes in on Harry’s steadily-growing frustration and anger at having gone through so much suffering in his life, and it’s strangely affecting. It’s something that’s been done in bits and pieces in the previous four movies, but this is the first time that somber mood permeates the film from beginning to end. It succeeds exceedingly well in serving as a jumping-off point for the series’ “finale” in movies 6 and 7. Phoenix is at once the last look back at what’s come before while simultaneously jumping off the cliff to hurtle toward the inevitable conclusion of the story. There’s a real sense of momentum carrying us toward that final conflict at the end of the movie, and it seems like it’s whizzing by.

If there’s something to quibble about, it’s the film’s length. It ain’t long enough! I could’ve easily sat in the theater for another 40 minutes, and some more running time may have helped ease some of the rushed plot inter-cutting that becomes necessary when you’re adapting a mammoth book into a 130-page screenplay. I want more, dammit! There’s still a ton of content from the book in the movie, but there’s SO much left out (no quidditch, for God’s sake!). Let’s pause now, while we consider how much of a dork I am.

I’ll say now, that if the 6th film isn’t at least 2:40, and the last film isn’t at least 3 hours, I will be disappointed. Everyone’s addicted to this series now; you don’t have to worry about losing ticket revenues because of longer running times. Trust me, this thing’s a cash machine.

A final note: make sure to see this on an IMAX screen if you can. The last 20 minutes are in 3-D, and it looks freaking great.

One thought on “Harry Potter & the Order of the Phoenix | A”