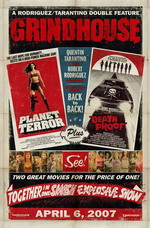 I have to think Grindhouse is much better than anything that would’ve come out in the seventies. It’s a rollicking good time from start to finish, and if you’re gonna see it, you must do so in a full theater for the best experience. it’s the kind of flick whose enjoyment will be greatly augmented by a receptive and vocal audience around you. These are the kinds of films that are meant to be communal celebrations of film, with filmgoers cheering for the heroes, groaning at the gore, and booing the bad guys. 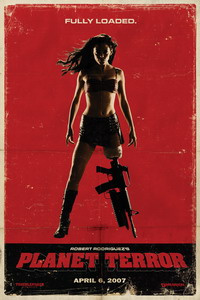 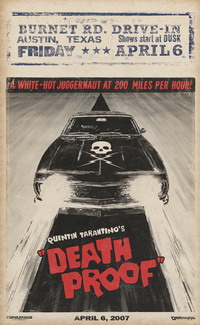 Since it’s a viewing experience that’s based very much on being in the moment in that theater, I’m not going to go into any details on the plot and the surrounding aspects of the Grindhouse experience. Before you see it, discriminating viewer, I’ll say that it’s got buckets of blood, plenty of stomach-churning gore, a load of over-the-top action, some great characters, and a few other surprises thrown in for your trouble. It’s an over-the-top delight, albeit a perverse one. Planet Terror’s balls-to-the-wall action extravaganza gives way to the ominous, plodding tension and character work of Death Proof. They’re both great for different reasons, but what really comes across is the care and respect both of the filmmakers have for the medium–they set out here to pack as much fun as possible into three hours of screen time, and that devotion has paid off in spades. You’ll laugh, you’ll cringe, you’ll jump out of your seat, you’ll applaud as the bad guys “get theirs.” You’re getting your 10 bucks’ worth at the multiplex for a change, folks. Judging by the weekend’s paltry box office take ($11M), however, there aren’t enough people thinking the same thing. Stop reading and get to the theater before the studios send it packing!

One thought on “Grindhouse | A-”