In the interests of focus however, we do finally seem to have a clear picture of the purpose behind Locke’s actions, even if John himself isn’t quite sure what the proverbial finish line holds. He realizes he serves at the pleasure of the Island, and will do whatever is necessary to live by the precepts he thinks his environment is dictating to him. An obvious allegory to mankind living in harmony with the world around it, Locke is the conservationist Greenpeace to Ben’s consumptionist Wal-Mart. (That comparison works, right?) Nurture the earth, and it’ll nurture you. So, if you happen to break your back, just pick up some litter and Mother Nature will have you walking inside of a week!

Anyway, we know Locke is willing to do whatever it takes to preserve the Island and his place on it–but just how far would he go? And is he preserving the Island, or the more selfish preservation of his miraculous recovery from paralysis? 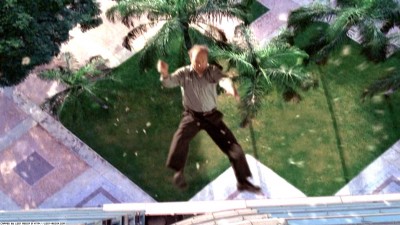 Whichever, Locke/Terry O’Quinn continues to be my favorite part of the show. The Locke-centric episodes, along with Desmond’s, have been by far the most entertaining and interesting of the series. The writers really seem to get up for writing this particular character, and O’Quinn is equal to the task every time. More, please.