After last week’s slam-tastic Ben-centric show, it’d be hard for any subsequent episode to compare, let alone one focusing on the now-interminable love affair between Jack and Kate. I know, ladies, you love it, but wouldn’t you rather see giant clouds of black smoke violently uprooting trees and tossing commandos through the air whilst a middle-aged megalomaniac looks on in grim satisfaction? Wait, don’t answer that. 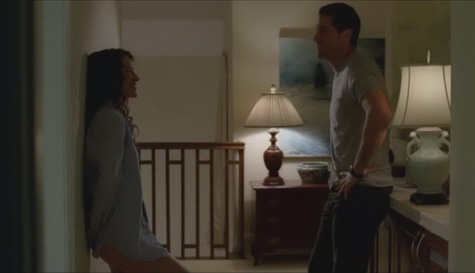 Anyway, despite my mild displeasure with the content of tonight’s episode, it does contain enough nuggets of interest to analyze exhaustively. No worries there. But in terms of tonight’s ‘A’ storyline, we now have a link to last season’s finale in which we saw a despairing Jack nearly kill himself. He and Kate lived happily ever after…for a bit, before Jack’s demons caught up with him and drove a wedge between he and his soulmate. Pretty cut and dried, yes? Not so fast, Sherlock…

I”m questioning everything we saw in the flash-forwards, based on some minor allusions made throughout the episode. Couple some notable quotes with the flash-forwards seeming to occur when present-Jack goes unconscious, and we could surmise that the whole thing was all in his head. Check out these quotes: “Was I the same when I got up this morning? But if I’m not the same, the next question is, ‘who in the world am I?'” (from the portion of “Alice in Wonderland” Jack reads Aaron); Bernard tells Jack, “wouldn’t you rather be imagining something nice back home?” just before he passes out. And don’t forget Hurley, who tells Jack his newfound happiness “all seems so perfect.”

(edit: watching the episode again during the course of taking screencaps, you can hear some sound effects shenanigans with Kate and Juliet’s voices in the opening scene, and in the subsequent shower scene. Kate’s voice is heard in the first scene, despite it being Juliet talking; and an amalgam of Kate and Juliet is heard from the shower scene later on.)

Now, knowing the Island as we do, perhaps the flash-forwards were slightly more significant than mere fever dreams; perhaps they were the Island’s way of showing Jack one possible future of his–and thus a form of urging him to stay ashore. If it could cure paralysis and cancer, I’m sure taking care of an appendix wouldn’t have been a problem for the place. I suppose it could be a form of the same time-traveling consciousness Desmond and Minkowski experienced. I go back to another quote from the episode, when Jack and Kate are talking about his father reading “Alice in Wonderland” (need I go into the plot details of that particular tale to make another allusion to the power of imagination?) to him as a child. “He was a good storyteller,” Jack tells her. Is this entire flash-forward another story Christian Shepherd is telling his son? 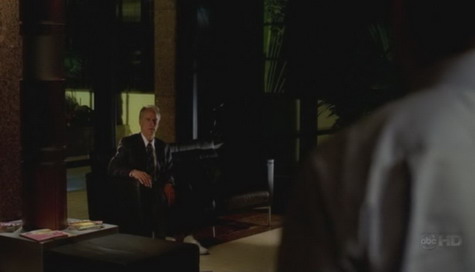 From next episode on, stuff’s gonna start hitting the fan, so look for some super-sized recaps in the next three weeks. Huzzah!

7 thoughts on “Ghosts of Lost-mas Future”