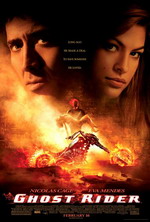 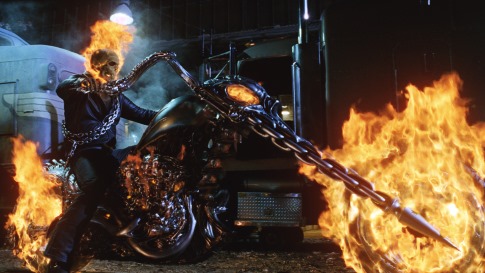 When daredevil Johnny Blaze turns into Ghost Rider each night, the shackles of morality and law come off as he punishes the evil without mercy. He doesn’t bring criminals to justice or tip off the police to their misdeeds–he metes out punishment himself as judge, jury and executioner. Goyer’s script would’ve made for a harrowing, dark horror movie in the vein of the aforementioned Blade and Batman Begins, both of which struck the right tone between depicting the terrible things that go bump in the night and good, old-fashioned action and entertainment. Goyer’s Ghost Rider could’ve been something special.

Instead, his script was jettisoned because studio execs feared Goyer’s version might not be “accessible” enough to mainstream audiences (read: it’d be rated R). Mark Steven Johnson, who did a good enough job on (the director’s cut of) Daredevil, was brought on to write an all new screenplay and direct a watered-down version of Goyer’s vision. What inevitably happens when Hollywood tries to appeal to the greatest possible audience with a movie is that it ends up appealing to no one. It’s got some nifty special effects that might make it worth seeing for fans of the comic book. It’s kind of neat to see something you’ve read on the page for years show up in a live-action, big budget flick. Unfortunately, those effects aren’t enough to make you ignore the cringe-inducing dialogue, the poor acting, and a story that would make a 4-year old stand up and question the writer’s intelligence.

Nicolas Cage seems to be really trying here, as the titular character, and I give him points for that, but no actor of any caliber could do much of anything with the dialogue. It’s probably a bad sign when Cage’s best acting in the movie comes depicting Johnny Blaze’s excitement at getting to watch a TV special on a ninja chimp (I couldn’t make that up) while eating jelly beans from a martini glass. Eva Mendes proves again that looking good is the only requirement to get a job in the entertainment industry, as she couldn’t act her way out of a paper bag. She does looks good, though, so that’s something. Sam Elliott and Peter Fonda deliver good performances. Unfortunately, you’d have to turn the sound off to appreciate it (that dialogue again). Wes Bentley, as Ghost Rider’s nemesis Blackheart, comes off as a whiny, emo brat instead of the evil, menacing son of Satan. His three cronies, demons taking the elemental forms of air, earth and water, help make the group look more like Good Charlotte rejects than terrifying hellspawn capable of mass destruction and mayhem. It doesn’t help their stature when Ghost Rider dispatches them by essentially whipping a chain around in the air like a cowboy with a lasso. 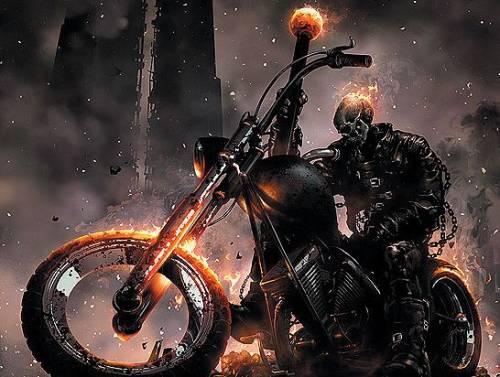 This image has more character and potential than anything in the film.

The story, as I’ve said, makes little to no sense, centering around some scroll that contains the souls of a town in the middle of nowhere which, if it falls into the wrong hands, will be bad. Bad for who exactly is never made quite clear. I may have been too distracted by the seventy-eight editing cuts every five seconds to notice. The director, Mark Steven Johnson, did a terrible job here, failing to establish any consistent mood or pacing. Big, slow-motion action sequences involving tricks with flaming chains and motorcycles are supposed to make up for that, I guess.

So Ghost Rider the film is, in a word, terrible. If you read the comic book, it might be worth an illegal download just to see the Rider on film. I don’t think they quite created a fearsome-enough Rider, but the FX artists did some decent work. Otherwise, those uninitiated to the story should head to a comic store and give the books a read. It’d be a far more valuable use of your time and money.