DAY 4: FRIDAY
There’s nothing quite like the 6:45 am wake-up call of a ringing phone after a night full of dancing, drinking and hospital visits to make one thrilled to be alive. I slowly peeled my eyes open, brushed some Cheetos off my pillow and picked up the phone to hear Dannyboy tell me our rental cars were going to be towed at 7am if they weren’t moved out of the neighboring bakery’s parking lot. What? Oh yeah, I parked in the bakery parking lot yesterday because there was no room in the hotel’s lot. Shit.

I didn’t “sprint” so much as I “lumbered” out of the hotel room and down to the street to move the car to a now-available spot in the parking lot. It was then back to bed for an altogether too brief hour or two. But, in actuality, sleep was low on the list of priorities this whole week. We were all having too much fun to bother meeting our daily REM sleep quotas, and today would be no exception.

The agenda’s highlight for today was a trip to Estes Park, a beautiful area of Rocky Mountain National Park about an hour or so from Fort Collins. The trip there was spent mainly on roads that’d been created by blasting massive chunks of the surrounding mountains away. The towering, sheer cliff faces on either side made things a bit claustrophobic but their majesty made for a scenic drive. (I really wanted to fit “majesty” in here somewhere.) Alas, because I was doing the driving, I didn’t get many good shots of those cliff faces. 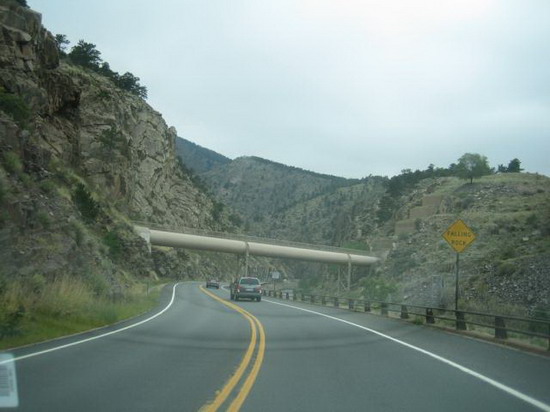 Once in town, we stopped at the visitor’s center for some maps and to get some recommendations on where to go from the helpful old lady behind the counter there. And helpful she was, pointing us to nearby Bear Lake, promising some great views of said body of water, along with the added benefit of low probability of actual bear attacks. 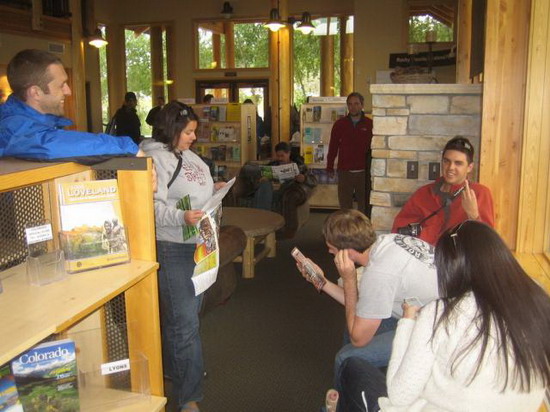 One of the many brochures there featured the “#1 U.S. Marty Robbins impersonator!” Wow! I’m sure he’s not quite as good as the “#1 Canadian Marty Robbins impersonator,” but never look a gift horse in the mouth, am I right? This impersonator was to be headlining the Chuck Wagon Supper & Show which, sadly, we’d have to pass on. More on this amazing brochure later. We got back in our cars and headed into Rocky Mountain National Park, and it wasn’t more than 5 minutes before we saw a bunch of cars parked at the side of the road, along with some people gathered further down the road by a fence.

Naturally, our caravan stopped and got out to see what all the commotion was about. Elk. A large herd of elk was grazing in the wide open fields to the right of the road. 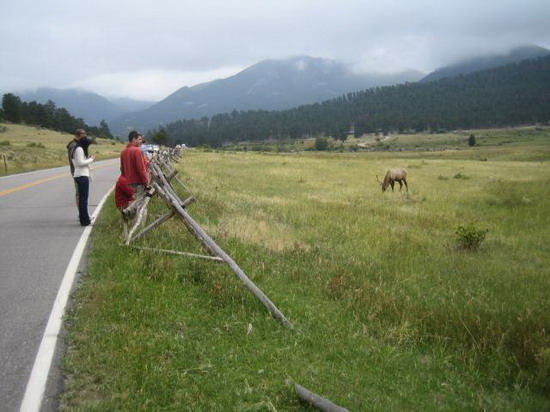 Juxtaposed with the surrounding mountains and relative peace and quiet, it was quite something to behold.

After satisfying our elk viewing quota, we headed up the mountainside to the trailhead. Now, frequent visitors to this site know of our group’s (or a subset of our group, anyway) affinity for squirrels. I don’t know what it is, but those little bastards are almost on the same level as chimps when it comes to comedy gold. Color me pleasantly surprised, then, when we saw not one but TWO of the rarely-seen mountain squirrel variety gnawing on some nuts on a bench alongside the parking lot. Zounds! 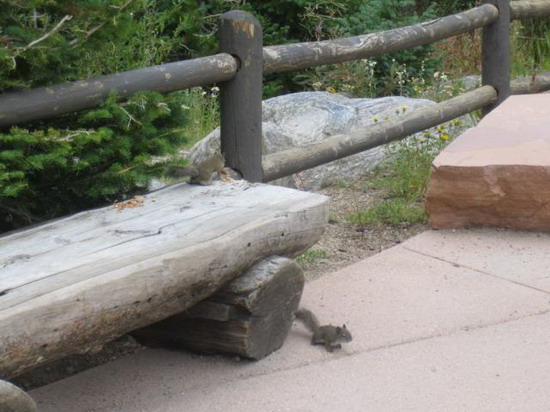 Only four of us were attacked, and while all escaped physically unscathed, the mental scars will take years to heal…

While we raced to snap as many pictures as possible of the beasts, the rest of our crew were eager to get hiking, none moreso than Andy.

Bear Lake itself was situated just a short walk away from the trailhead, and it lived up to the billing the friendly old lady at the visitor’s center gave it. The mist-shrouded lake is surrounded by cliff faces dotted with scrub and trees, and the ceiling of clouds overhead gave the whole tableau a sense of natural tranquility.

That is, until we arrived and started yelling about squirrels and bear attacks. 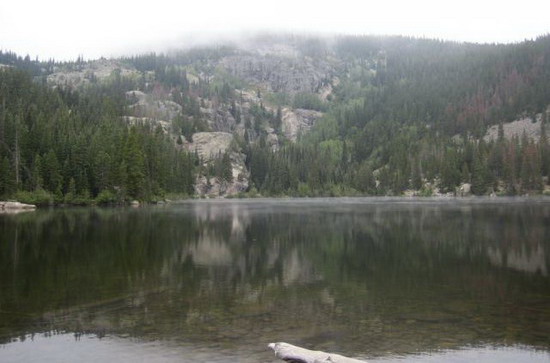 This lake is definitely not made of bears. False advertising.

Bitterly disappointed with the lack of bears, we spat in the lake’s general direction and took off down the trail running up the mountain. Along the way, I was struck both by the wide variety of vegetation, and by how quickly we can start acting like 12-year olds again. I sketched some of the plantlife in my “nature journal” (not really), and then took some pictures of Justin’s tragic fate at the hands of a sudden rockslide. We’re not sure what happened to him, but reports in the paper later that week indicated his remains were disposed of by the mountain squirrels. 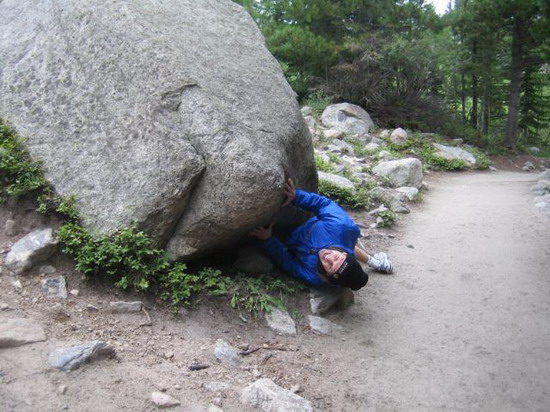 As we hiked along the trail and gained altitude, the trees began to thin out a bit, and had the weather been better we would’ve been treated to some spectacular views of the surrounding mountains. Alas, with dense cloud cover overhead, no such vistas were seen, but the view had its charm all the same. With that in mind, our path led us to Alberta Falls, picturesquely situated just off the trail. 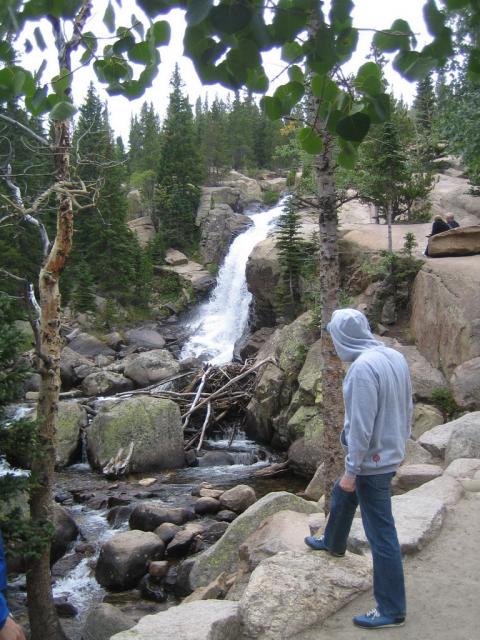 We hung around the Falls a bit and even had a professional photographer (or so he appeared) take a group shot of us, which Steve has generously (and unknowingly) donated from his website. 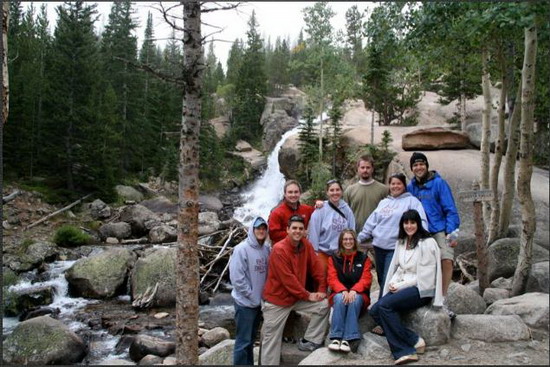 A few of us were feeling the ill effects of the previous night’s fun, so after taking several dozen more pictures, it was time to return down the mountain to our cars. It was about this time that I finally started feeling the effects of the altitude (I’d been fine on Tuesday’s hike), heaving like a 78-year old emphysema patient as I struggled up the trail’s final incline before the parking lot.

All of us were in dire need of food by this point as well, so we drove back into town and stopped at world-famous Ed’s Cantina (by “world,” I refer to the 78-foot radius around the aforementioned Ed’s Cantina) for a Mexican feast. The nine of us jammed into a booth made for four which, when combined with our relative exhaustion and the altitude, resulted in uproarius laughter and shenanigans. I don’t remember what we were laughing about, but laugh we did, surely annoying all the other patrons out to enjoy a quiet, Mexican meal with their families. I will evermore refer to that period of time as “Burrito Madness.” Anyway, we inhaled about seven bowls of tortilla chips and salsa before our entrees arrived, and it showed when we all ate approximately four of the 28 fajitas we ordered. 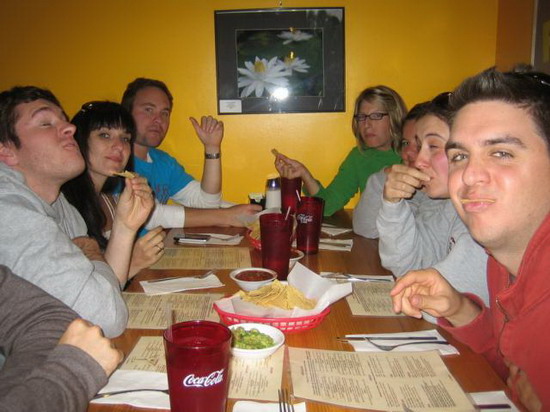 The drive back to Fort Collins was marked with all manner of horrific gas, which I will not elaborate further on, as I’m already having paralyzing flashbacks just thinking back on it.

Back in Fort Collins, we reconvened with the full complement of EA gangmembers in Sean’s hotel room, where we knocked back a few Fat Tires from New Belgium and planned the night ahead. Most of us were pretty tired, and so opted for a quiet night of–what else?–drinking! The bride and groom-to-be weren’t with us on today’s hike, so I regaled Ross with tales of our adventures. He didn’t seem particularly impressed until we showed him the Chuck Wagon brochure featuring the “#1 U.S. Marty Robbins impersonator.” He was quite taken with it, even going so far as to flash a sly “Toy-face.” 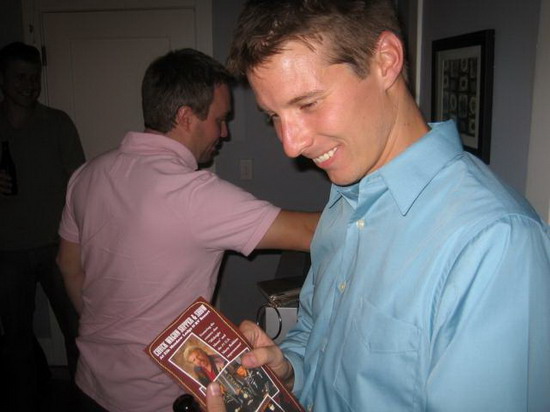 The rest of our uneventful night was spent back at Coopersmith’s (the eventful final stop on Thursday’s brewery tour), where we had a few beers and shot some pool. A nice way to end another full day. 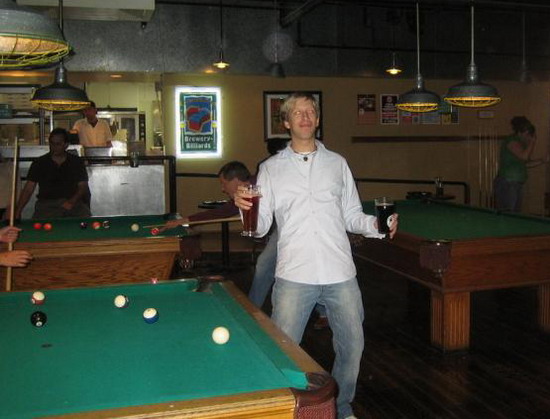