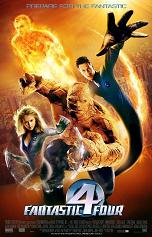 Not nearly as bad as I thought it’d be, but still a clunker nonetheless. Horrible casting outside of Michael Chiklis, a failure to remain faithful to the source material, and direction straight from MTV leads to a waste of money but also inevitable sequels. FF is the story of four “scientists” and a billionaire industrialist who use said industrialist’s space laboratory to conduct an experiment analyzing the sun’s cosmic rays. The cosmic rays arrive ahead of schedule; chaos ensues, resulting in each of the five being imbued with “fantastic” powers. Mr. Fantastic becomes elastic. The Invisible Woman becomes, well, invisible. The Thing is pure, solid rock. The Human Torch is a huge flamer. Victor Von Doom becomes Dr. Doom or, as I like to call him, the Human Taser. Meh, there’s not much more to say. It’s worth a “it’s 3am and I can’t get to sleep because of all the peanut M&M’s I ate so let’s see what’s on cable” watch. It’s less than “fantastic,” one might say. Am I right? Am I right? I’ll be here all week. Thank you, good night!