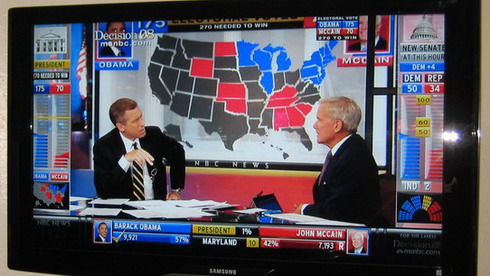 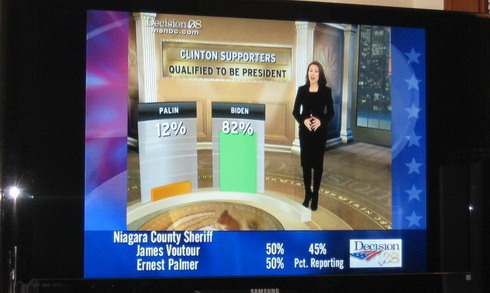 I’m pretty sure Tom Brokaw jumped out the 30th floor of Rockefeller Center before the night ended. Catch the Peacock Fever! All credit to new election expert Chuck Todd, but Tim Russert was sorely missed. I can’t think of a better way to watch the returns than just Brokaw and Russert in front of a non-computer-generated map talking about the election. Woe for the old days. Just because the election’s galvanized many of the country’s younger voters into action doesn’t mean you need to pander to the MTV/ADD crowd, NBC.

CBS
I kept expecting Katie Couric to suddenly start interviewing Tom Cruise or offer a report on great but affordable gifts for the upcoming holiday season, but she kept to the election, doing a decent job of moderating the many personalities and locations. CBS’ visual wizards must’ve had the same wacky batch of coffee NBC’s did, quite possibly jamming more numbers and colored boxes per square inch than I thought possible. The mainframe supercomputers required for such processing power must’ve caught fire by the end of the night. 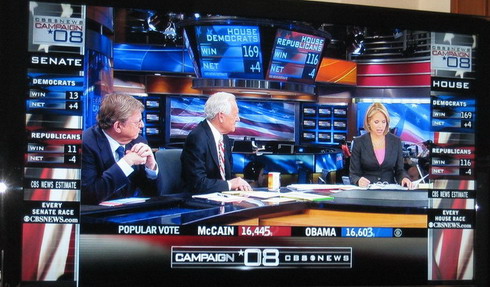 And why the frick is Couric still the lead CBS anchor while you’ve got the vastly superior Bob Schieffer sitting right there? 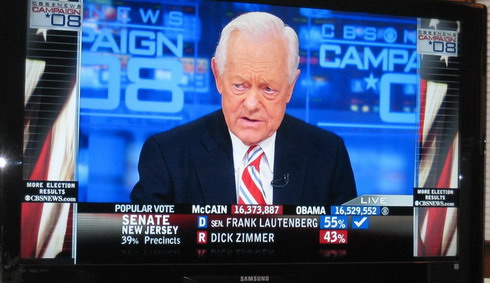 FOX
An air of resigned acceptance around the conservative (read: Republican) anchors of Fox’s telecast as they watched the returns come in. I almost felt bad for them until Karl Rove showed up and started working his witchcraft. 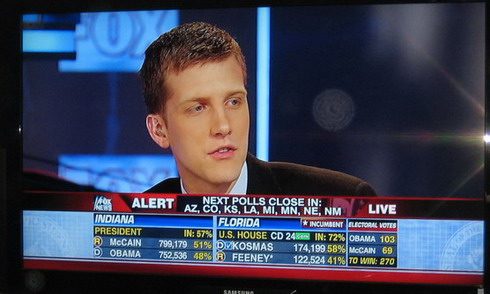 Another young employee tripping on the Fox kool-aid

I don’t think Bill O’Reilly was that big a fan of McCain, by the way. Not “conservative” enough for him. Thank Jebus, for that prevented him from loosing his trademark murderous rage upon the rest of the defenseless Fox anchors and reporters.

ABC
I’m sorry to report I don’t have a screencap of ABC’s early election coverage, featuring Rick Klein and the always-entertaining hairpiece of Sam Donaldson. Who is Rick Klein, you ask? I have no idea, but he looked like an ABC intern that’d stumbled on-set and subbed for the real anchor who called in sick. The juxtaposition of this young kid next to Donaldson warms my sarcastic heart to no end. 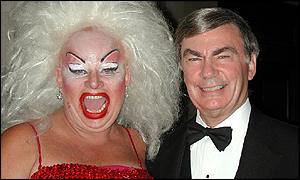 The best Sam Donaldson image I could find

Charlie Gibson, Diane Sawyer and George Stephanopoupoiupoiuououououlos took over the broadcast around 8 and ABC moved into full graphical hijinx and hilarity mode. A highlight was Charlie Gibson trying to operate the now-ubiquitous projected map touchscreen. 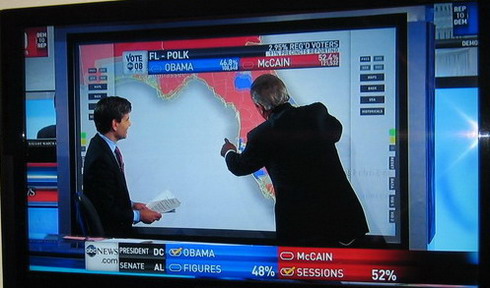 “I think I just pulled something.”

Comedy Central
Really, they had their own live election coverage, anchored by Jon Stewart and Stephen Colbert. Hilarious, of course. I enjoyed Colbert’s reaction to McCain’s defeat especially:

PBS
I’m not going to pretend PBS’ news broadcasts are the last bastion of objectivity in the media universe, but they’re close. They make sure to offer viewpoints from both sides–and both viewpoints are typically presented intelligently and respectfully. Anchored by regular Presidential debate moderator, Jim Lehrer, they’ve got a fan here. 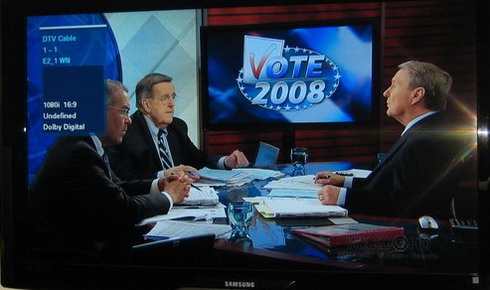 I switched between PBS and Comedy Central most of the night. It helped greatly that PBS was the only network still offering an HD signal after the local channels started their own annoying results graphics and ruined the HD feeds. I wish the old guy named “Larry” these stations have running their graphics department “out back” would retire and let someone with some actual visual design skills get to work on these. I want my HD, dammit.

I also got a kick out of each local station’s “Election Center.” Said “Election Center” appeared to be a supply room with laptops operated by forced elderly labor as reporters awkwardly conducted interviews amidst the feverish excitement of the Center’s workers. Oh, and I think there was some bunting on the walls. You can’t have an election center without bunting, amirite?

Another highlight was Channel 2’s Scott Levin trying to read some of the returns vis a vis the graphics featuring each race’s candidates. Said graphics, however, featured nothing more than a headshot of each candidate flanked by their party’s logo (elephant or donkey). No numbers, no results.

Scott Levin: “Alright, let’s check in on some of the races; we’ve got quite a few tight ones here.”
Maryalice Demler: “We sure do, Scott!”
(first graphic with no results on it comes up)
Levin: “Okay, we’ve got Mesi versus Ranzenholfer aaaaaand no results yet. But in another tightly-contested race, we have Kathy Konst against Dale Volker…”
(graphic with no results comes up)
Levin: “…aaaand no results there quite yet. Uh, let’s return you now to NBC’s national coverage.”

Later, reporter Scott Brown had the unfortunate duty of writing the local results onto a touchscreen projection of a Power Point presentation that looked like a bad high school civics project. Winners of each race were denoted by a big red line underneath their name. Well, at least “Larry” in the control room doesn’t have to worry about the graphics computers overheating.

That’s all I got for now. See you in 2012 for OBAMA VS. PALIN: SNOWMACHINE SHOWDOWN!