I’ve held off writing about the Sabres thus far in the playoffs because the team really hasn’t done anything yet–there’s a long way still to go if they want to raise the Cup in Buffalo. But I have no choice but to write something after last night’s hyper-dramatic Game 5 overtime victory in HSBC Arena. As I said in my previous alcohol-fueled rant, the Sabres needed to lift the puck up when shooting on Lundqvist, as the Swedish goaltender has stoned everything that comes in lower than a foot off the ice. He’s just too good down low to repeatedly fire shots into his pads.

Unfortunately, the Sabres still hadn’t figured this out until it was almost too late. They peppered Lundqvist with 30+ shots in regulation, nearly all of them slapping harmlessly into his goal pads. Wouldn’t you know it, when all looked lost, Chris Drury (who shall henceforth be known as “Chris Freaking Drury!”) fires a rising wrist shot that sailed through Thomas Vanek’s legs and into the net to send it to overtime. All Drury does is make gigantic plays at the most important moments. He’s done it since he was a kid. (Here’s a great story on him from Sports Illustrated.)

After successfully killing a penalty in the OT, Buffalo got a call of their own and converted with the extra man–the goal scored by none other than Maxim Afinogenov, who had stunk up the joint thus far in the playoffs, having been a healthy scratch from Game 4. This is what makes sports great; the Russian goes from goat to toast of the town with a single shot. 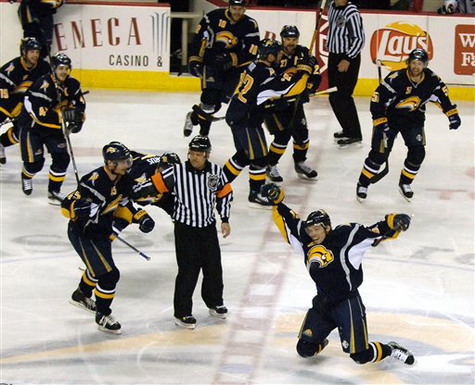 Pandemonium in the arena, pandemonium outside on the plaza, pandemonium all along Chippewa Avenue. I’m not sure I’ve ever seen Sabres fans in such a euphoric, delirious frenzy after a goal–and if you were out in Buffalo last night, you were a part of something special. And hey–they’re not done yet!

5 thoughts on “Did that really happen?”