Strippers! Guns! Billy Dee Williams! Combine them together, add water and you’ve got one of the best Lost openings ever. One of the highlights of a surprisingly good episode featured a focus on two of the show’s initially-superfluous, Barbie & Ken guest stars, Nikki and Paulo. And “we all know what happens to guest stars,” don’t we? The standard conceit of the expendable guest star meeting their untimely demise is nothing new on the show, as Dr. Arzt the science teacher, Colleen the significant “Other,” the Captain of Flight 815, Kelvin Inman, and even Boone & Shannon can all attest to.

Anyway, what Paulo and Nikki may not have in common with those ill-fated characters is a moral compass. We quickly discover their capacity for dastardly activity, poisoning a wealthy Australian TV producer they’ve been conning in order to steal an $8 million bag of diamonds. I don’t think they made Jacob’s list. And they seem to meet a fitting fate, one right out of a Hitchcock movie or Twilight Zone episode, being buried alive. I wasn’t sure the writers would have the balls to actually go through with it (shades of Charlie’s aborted death by hanging in season one), but that was a heckuva moment to end the show with. Creep City, amirite?! I suppose we might see them again at some point, perhaps when Cerberus gets bored appearing as Locke’s father, but for now Paulo & Nikki will be long-remembered for their gruesome exit from the show and perhaps transcend the category of “throwaway guest star.” Though, they were pretty much thrown away, weren’t they? 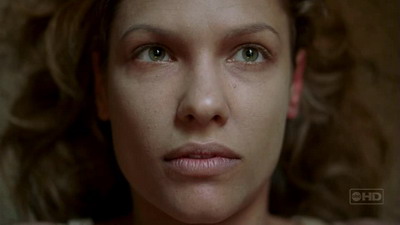 Their dastardly deeds notwithstanding (those of you who had the over in the “# of Times Jeff Uses ‘Dastardly’ in His Lost Recap Pool” win!), one thing that is apparent about them is that they’re intelligent. Intelligent enough to discover a Dharma station, another crashed plane and the existence of the Others about a month before anyone else. The other castaways were likely too busy to notice there might’ve been more going on around the Island than tedious love triangles and raft-building.

Until next week. We can only hope we haven’t seen the last of Billy Dee.