Home from work and ready to get recapping. Let’s not waste any time in apologizing for the delay. And let’s not waste time talking about the first 57 minutes of the episode either; I wanna get straight to the good stuff at the end, featuring Ms. Hawking & the Pendulum of Doom. 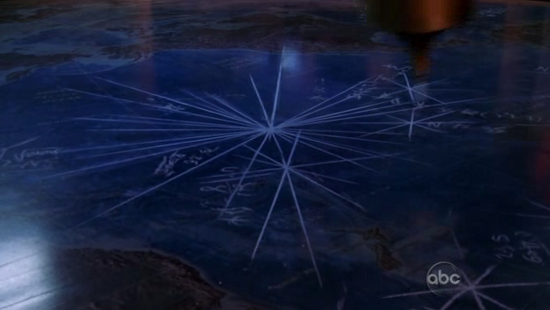 So there’s a multi-axis pendulum swaying to and fro above a map of the South Pacific, making lines in an intersecting pattern. The nearby computer (which looks like it came straight out of a Dharma station, interestingly enough) is likely using whatever equations Ms. Hawking is working through on her chalkboard to calculate when and where (the “event window,” as it were) the Island will next appear in her time period. 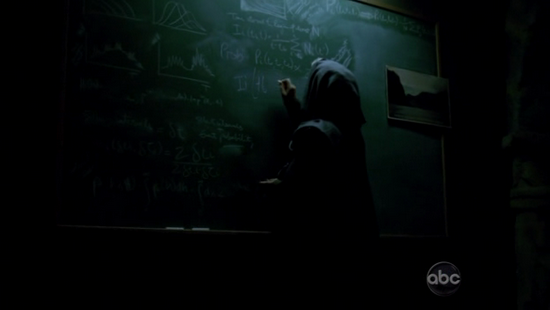 That “event window” is, as she tells Ben, 70 hours away. And based on the markings and the computer image below, the Island could be jumping all over the Pacific throughout time. That 70-hour window is likely marked by the big intersection in the middle. Perhaps it will only appear in their time at that exact location. Suffice it to say, if the Oceanic 6 and Locke miss that window, “God help us all.” (Much like what would’ve happened had Dharma drilled too far under The Orchid.) 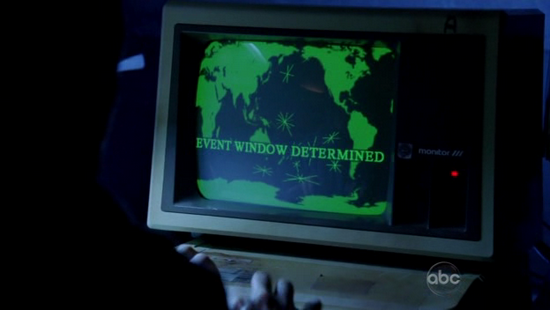 When last we saw Ms. Hawking, she was a temporal-policewoman-of-sorts trying to stop Desmond from changing the past (“Flashes Before Your Eyes“). Actually, scratch that; when last we saw her, it was in a badly-Photoshopped picture alongside the monk who mentored Desmond when he was there looking for a direction in life.

I’m not quite sure what to make of that yet, but the tangent I’ll take from it is that her picture was in a monastery, and the place she and Ben met certainly appeared to be of the religious variety. Is it in the UK, close to where Desmond flashed back to? That’s probably a stretch; I’m not sure Ben would’ve flown all the way there after Hurley got arrested. But let’s operate on the assumption nonetheless, shall we? 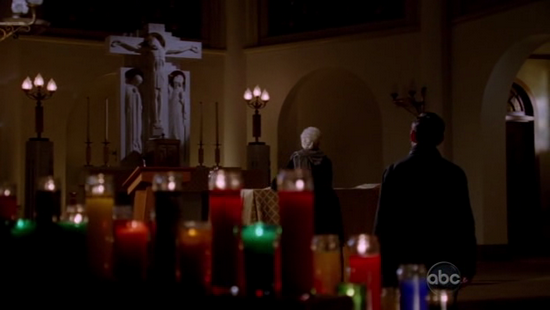 If she is in the UK, perhaps even close to Oxford University, might it not be such a stretch to think she’s Faraday’s mother? She certainly has the mathematical aptitude to be in the same family, based on her mad chalkboard equation skillz. I think Desmond was sent to find her by Faraday to figure out how to travel through time. Based on her appearance in Desmond’s flashes, I think it would be reasonable to assume she knows how to do just that. Time, heh, will tell.