Huzzah for new Lost episodes! Welcome to another year full of fun-filled, bullet-point-riddled recaps at Jeff-Fischer.net! Let’s not waste anymore time with pleasantries and move on to some analyses. First, let me cap off my “Find 815” alternate-reality game (ARG) coverage by saying Sam Thomas and the crew of the salvage vessel he was on don’t find what they’re looking for (the Black Rock). Instead, they find–wouldn’t you know it?–the wreckage of Oceanic Flight 815, which leads to the news report we saw last season on The Flame station TV’s (manned by everyone’s favorite one-eyed Other, Mikhail). 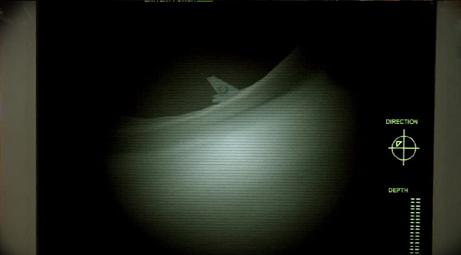 Image from an underwater ROV camera of 815’s tail

Well, we already knew about that news report and the discovery of 815’s wreckage, so what’s so new about this? Considering all the facets of the ARG, it seems to confirm that the found wreckage is part of an elaborate conspiracy designed to get people to stop looking for 815. The Maxwell Group, which sent the eventual coordinates of the 815’s wreckage to Sam via coded email, turned out to be a subsidiary of Widmore Industries (Penny’s dad’s organization). Seeing as how Mr. Widmore ain’t exactly a paragon of virtue, my bet is he’s part of the upper ranks of the conspiracy to halt all efforts to find 815. So, we have a very nice warm-up for this season’s premiere. Which I should probably get to now, lest readers start falling asleep at the prospects of deep investigation of an online Internet game. If you want more details, check out the game at http://www.find815.com/ or read a summary here. I’ll end with my feeling that we haven’t seen the last of Sam Thomas and his nemesis, Oscar Talbot.

Tonight’s episode then, “The Beginning of the End.” It was pretty lean in terms of plot, but there’s plenty to dissect as always. One of the major themes seemed to be defying conventions–the conventions the show has set for itself in its previous three seasons. It began with the very first shot of the season: a pile of squash. No close-up of an eye opening this time! This can only mean squash has an all-important bearing on the show, one that will be revealed slowly but steadily, capped by the revelation that THE ISLAND IS MADE OF SENTIENT SQUASH! 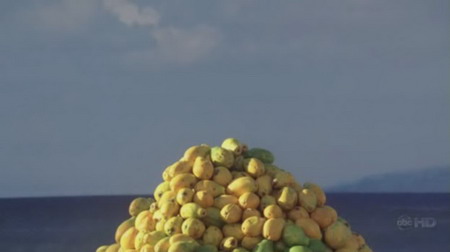 Back to conventions. The show’s main conceit, flashbacks of our castaways, was turned on its head in the season three finale, with the revelation that the events on the mainland were taking place in future and thus were “flash-forwards” from present day on the island. The premiere, and episodes from here on out, will likely use the same structure, though I think they did a bit of jumping backward in time tonight. I think the flash-forwards took place before the flash-forwards in last year’s finale, based mainly on Jack’s visit with Hurley in the Santa Rosa mental hospital. Jack, despite his apparent drinking problems (gotta love a screwdriver before heading off to work in the morning), seems relatively upbeat and content with his decision to have left the island. This is a stark contrast to the utter, suicidal despair he exhibited last season (while bearded, I might add, something he told Hurley he was thinking about doing). 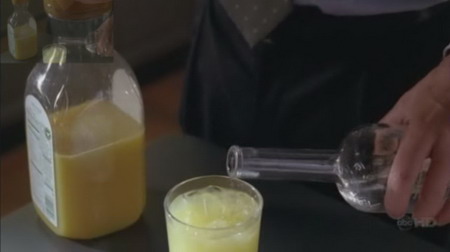 The most interesting aspect of his conversation with Hurley was the allusion to the two of them (and perhaps the rest of the “Oceanic Six” that returned from the island) keeping some sort of secret, and that secret is probably the fact that there are still Oceanic survivors on the island. If I extrapolate, as I’m wont to do, maybe Jack revealed that secret to someone he shouldn’t have, and that resulted in some bad news for some of his fellow castaways (including the resident of that coffin from last season’s finale, possibly). Hurley doesn’t seem to regard Jack in a very positive light during their encounter, further emphasizing Jack’s shift from infallible leader to misguided misanthrope who would’ve killed Locke had that revolver been loaded. 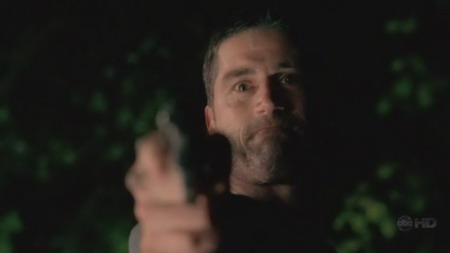 My conventions, however, have not changed. On with the bullet points.

That’s all for this week, folks. One down, only seven to go, thanks to this blasted writer’s strike.