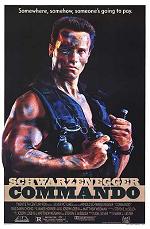 The greatest movie in the recorded history of time as the human race knows it? I think so, folks. It features Arnold at the height of his Eighties hot streak, yelling unintelligibly while killing wave after wave of bad guy in movie after movie. The unintentional comedy factor is off the charts, and Commando couldn’t be a better example of everything that was right about the film industry in the 80’s.

Other flicks like Red Heat and Predator weren’t quite as unintentionally hilarious as Commando, however, never quite finding that fine line between rollicking action and wildly inappropriate dialogue. (Predator does come close, though, with such lines as “Billy! Find me a way out of dis hoooole!” and “Get to da choppah!!!”) In lieu of a review, I’m just going to post some of the many memorable scenes from the movie. My favorite parts are in bold.

[Matrix has thrown a pipe through Bennett]
Matrix: LET OV SOME STEEEAM, BENNETT!

Sully: Here’s twenty dollars to get some beers in Val Verde. It’ll give us all a little more time with your daughter.
Henriques: Heh.
Matrix: You’re a funny man, Sully, I like you. That’s why I’m going to kill you last.

Matrix: Remember, Sully, when I promised to kill you last?
Sully: That’s right, Matrix. You did.
Matrix: I lied.

Cooke: You scared motherfucker? Well you should be because this green beret is going to kick your big ass.
Matrix: I eat green berets for breakfast. And right now I’m very hungry.

Matrix: [after killing a man in the plane] Don’t disturb my friend, he’s dead tired.

Gen. Kirby: Leave anything for us?
Matrix: Just bah-deez.

Diaz: Mellow out man. Your daughter is safe, Colonel. Now whether she stays that way is up to you. My people, they got some business with you. And if you want your kid back, then you gotta co-operate, right?
Matrix: Wrong!
[shoots Diaz between the eyes]

Jenny: Heeere come the sandwiches!
Matrix: [reading about Boy George in a pop magazine] Why don’t they just call him Girl George? It would cut down on the confusion.
Jenny: Oh, Dad, that is so old.
Matrix: Ha Ha. You know when I was a boy and rock’n’roll came to East Germany, the communists said it was subversive.
[thinks and smiles]
Matrix: Maybe they were right.

Arius: Now that I have you, you will do exactly as I tell you.
Matrix: Fuck you.

Matrix: Keep an eye out, they’ll be coming. You’re downwind, the air currents might tip them off
Jackson: Downwind?
[looks at Matrix like he’s crazy]
Jackson: You think I could smell them coming?
Matrix: I did.

Matrix: What’s wrong?
Cindy: This isn’t a plane… it’s a canoe with wings.
Matrix: Well, then, get in and start paddling.

Bennett: John, I feel good. Just like old times. What’s it feel like to be a dying man? You’re a dead man, John!
Matrix: Bullshit!

This is on cable all the time, and you could probably buy it on amazon.com for three bucks. Well worth the money to add it to your collection, my friends. You won’t be sorry.