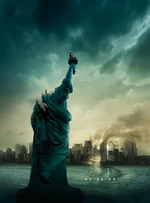 The easiest way to describe Cloverfield as a film is Blair Witch Project meets Godzilla, which is to say it’s shot in the style of the handheld Blair Witch with the production value of the blockbuster Godzilla that came out in 2003. While I liked the former, the latter was an overhyped turd-on-arrival that had all the intelligence of Miss South Carolina (I’m really starting to feel bad for her; maybe I should give her a call and take her out). And while Cloverfield isn’t exactly a discourse on the finer points of the agrarian emphases of pre-industrial society, it manages to engage your mind with what it shows you onscreen (and just as much with what it doesn’t show you). I love the pace it starts with at Rob’s good-bye party; a bunch of unassuming partygoers getting together on what could be any regular night. When the first tremors of fear hit, the plot’s pace quickens, snowballing as the characters get caught up in new layers of the chaos that New York City’s “visitor” has wrought. It’s a rollercoaster ride once the shit hits the fan.

That escalation in tension and pace is accomplished without having to show action in the conventional blockbuster method of establishing wide shots, medium shots of our characters, and then back-and-forth dialogue. All the events are seen through the solitary lens of Hud’s camera and as such, we don’t know anymore about what’s going on than our main characters do. That makes it all the more terrifying when they do find themselves in the middle of the action–it comes without warning and without mercy. You react viscerally, just as the characters do. Those action sequences we do get are just as awe-inspiring as they’d be with a wide shot, and they’re pretty effective despite it all being on a mini-DV cam (I think of the first contact our characters have with the military and the Brooklyn Bridge sequences, in particular). The sound work has a lot to do with that as well, I think–that mini-cam has a hell of a microphone. 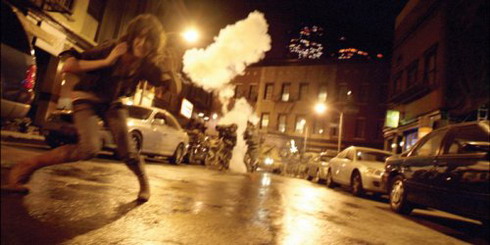 We are shown certain external facets of the larger picture, with scattered news reports on TV, radio chatter on the military’s walkie-talkies, and the broadcast in the helicopter after it crashes in Central Park. You never find out where the monster came from (more on that in a moment), why it’s there, or how the rest of the country is viewing the events. There could be a global attack underway, for all we know (though Rob’s cell phone conversation with his mom doesn’t give any credence to that). You do certainly get to see the beast in its entirety, in daylight, which I don’t even think was necessary. The shadowed, corner-of-the-eye glimpses of the thing disappearing around buildings, or of its massive foot crushing a tank, are all that’s needed.

It’s a ballsy move to end the movie the way it does, without a real “resolution,” but factoring in the way it’s presented–as one piece in a Department of Defense record of the “Cloverfield Incident”–it has to work that way. You can’t have a title card at the end that lays out the events of the following days, you can’t have an external scene after the credits that shows the city in ruins with a soldier finding the camera. Hell, we don’t even know why the movie’s called “Cloverfield!” It’s great, isn’t it! The story needs to stay within the confines of the camera. It’s cheating to do otherwise, and makes the end all the more haunting. The movie is able to do this because it’s got quality people making that, and I hope Hollywood takes that into account lest it try to make a cheap knock-off of this style of moviemaking. It’s not easy to pull off a movie shot on a single mini-cam and still have it be entertaining and coherent. Give credit to producer J.J. Abrams, whose track record is pretty impressive thus far (notwithstanding the terrible fate that befell Alias) for putting together a crew that knocked it out of the park.

Two final notes: the audio clip after the credits is actually being played in reverse, and when played properly says, “it’s still alive.” We don’t need a sequel, Cloverfield producers. Don’t mess this up. Second, in the final scene of the movie, a flashback to Beth and Rob’s day together, the camera pans to the ocean briefly while they’re in the ferris wheel. I missed this, but apparently you can see something large crash into the water. The audio clip may be interpreted as evidence a sequel could be in the offing, but I wouldn’t give it too much weight. As much as I’d like to see a sequel or a more conventional companion piece that shows the events of Cloverfield from a broader perspective, it’s just because the movie keeps you thinking long after the credits roll. It’s the quintessential “leave them wanting more” approach. I want more, but we don’t need more to make Cloverfield the best film of 2008 (keep in mind I’m writing this on January 19th.) 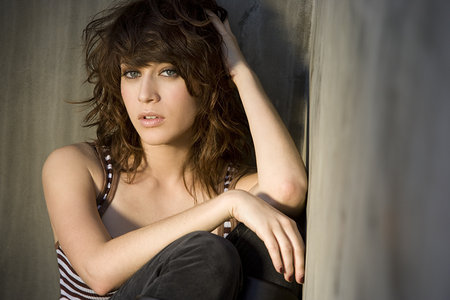