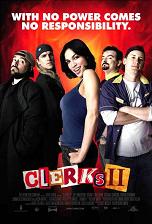 Kevin Smith returns from his critical beat-down (courtesy of Jersey Girl) to bring us a veritable cornucopia of dick and fart (and donkey) jokes in the sequel to an indie flick that started a revolution: Clerks. Dante and Randal are back working for a fast food joint, this time with Rosario Dawson as their “boss,” and a fellow clerk in babyfaced Elias.

Though dick and fart jokes have been Smith’s forte (with my full support), he’s quietly introduced a basic sweetness, for lack of a better word, in each of his films, one which he’s tried to show more and more in the last couple of movies. Though not on par with the sapfest that was Jersey Girl, Clerks II certainly has its moments of lovelorn romance and heart. Unfortunately–and despite how good these moments can be–they represent huge shifts in tone when they appear onscreen, and bog down what is an otherwise fast-paced, hilarious romp. Yeah, I just used “romp” in a sentence.

The conclusion of the film somewhat makes up for those moments, though, with an altogether unexpected “poring their hearts out” conversation between Dante and Randal that ties together seemingly every facet of their miserable existence as clerks. The strange thing is that, well, it works. It works really well. It takes the history between the two characters, and what we’ve seen of them, injects a dose of reality into it, and delivers a thought-provoking message about how to live one’s life. Yeah, that’s right–a dick and fart movie that has a thought-provoking moral. But, it doesn’t necessarily work that well until the movie’s end, and is chief among the reasons I’m only giving the movie a B.

But enough of that crap; you’re wondering if it’s funny or not. Fret not, readers, it has its’ hilarious moments. Jay & Silent Bob are back–Jay giving new life to a character from Silence of the Lambs; Randal’s as wildly inappropriate as ever, managing to offend every sensibility you have (and even some you don’t); and Smith managed to write a climax so depraved, it has to be seen to be believed. I mentioned the “sweetness” Smith has developed over the course of his films, but he’s also made subtle allusions to this depraved act in his other flicks, and it’s all built up to this. You’ll grimace in horror when it starts, but you won’t be able to look away.

One thought on “Clerks II | B”