I walked aimlessly around the wharf and the waterline for a while until a large submarine anchored to the pier caught my eye, the USS Pampanito. Widely known as a lover of submarines, as I am (preferably with capicola and provolone), I stopped and ogled the vintage sub for a while, but elected not to actually take a tour of the interior, as the preferred height requirement appeared to be 5-foot-2 and under. That, and the ticket-taker in the booth there gave me the stink-eye. I’m fairly certain he lives in that 5×5 booth year-round. Further down the pier was a larger naval vessel, the SS Jeremiah O’Brien. “The O’Brien is the sole survivor of the 6,939-ship armada that stormed Normandy on D-Day, 1944, and one of only two currently operational WWII Liberty ships afloat of the 2,751 built during the war.” [Wikipedia] Fearing for my life if I walked much farther down the pier, due mainly to the sudden appearance of bearded men carrying clubs, I turned around and headed back to the wharf and my hotel to meet up with Martha. 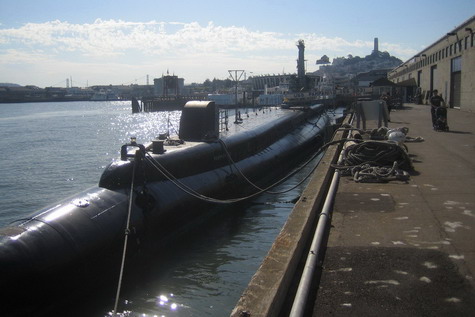 Martha showed me the rest of the sights at the wharf, including the (in)famous seal congregation at Pier 39. Their incessant barking warns you of their presence well before you actually see them, and it’s quite something to see a hundred or so of them lounging on the platforms mere feet from masses of tourists on the surrounding boardwalk. One, nomad seal was off by himself on another platform, hardly moving. I’m not sure if he was outcast because he’s diseased or if he’s just too cool for the rest of them. Either way, he was enjoying having a platform to himself.

We spent another 10 minutes or so watching the seals repeatedly knock each other into the water and then headed further down the wharf and the boardwalk to see some of the shops and the row upon row of yachts moored at the docks. One of my objectives on this phase of the trip was to catch a glimpse of the enigmatic (and insane) Bush Man–the “world famous” Bush Man, if the Internet legends recounting his life are any indication–who was known to operate out of Fisherman’s Wharf. Alas, to my utter dismay and eternal disappointment, he was nowhere to be found. This video from YouTube is all I have to keep alive my hopes of one day meeting the legend:

Ready for an area of town not inundated with tourists and seals, Martha and I hopped on the F line train toward the downtown area. It was “Spare the Air Day” in the Bay Area, and thus there was no fare for the trip. I’d like to see Buffalo adopt such a day, but I’m afraid the Metro bus line would go out of business if their already-meager revenues were affected by concerns for the environment. Anyway, we exited the tram at the edge of downtown-proper to see a couple of scrap-metal sculptures/statues backed by a great view of the San Francisco Bay Bridge. We crossed paths around this time with a guy in garish, pseudo-plaid pants who was no doubt on a mission of great importance, if his intense speed-walking posture was any indication. 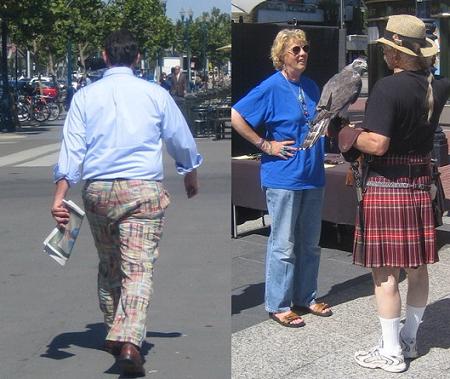 We crossed the street after recovering our sight and immediately saw a guy in a kilt selling some odds and ends at a mini-farmer’s market. Fortunately, that would be the end of the odd legwear parade. I think the trend was headed in the direction of zubaz pants next, so maybe it’s best that it ended with the kilt. Heading into the city, we took in some of the skyscrapers and stopped for a drink in Union Square, an area surrounded by a number or high-profile retailers and boutiques (think Saks Fifth Avenue, Tiffany, Gap, Nordstrom’s, etc.). I felt very European sitting in the cafe with Martha, drinking a Heineken and hearing people speak in foreign tongues. Weird. After drinks, we headed inside one of the buildings in the shopping district, essentially a row of three and four-story mini-malls featuring a bunch of high-class retailers. There was also a booth selling windshield replacement, so I guess it doesn’t matter where you are in this country–a local strip mall or a posh boutique–there will always be a need for cheap windshield replacement.

Next up was Chinatown by way of the geography San Fran is so famous for: its innumerable steep hills. Martha, my guide, made sure to show me as many of these hills as is possible. That probably ended up being a good thing, as I needed to walk off the multitude of pastries I consumed at the aforementioned continental breakfast that morning. As for Chinatown itself, it’s about what you’d expect. Lots of Chinese stuff. Chinese citizens, Chinese food, Chinese storefronts, Chinese signs, Chinese hotels, Chinese wiener dogs. You know, all the standard stuff you’d expect.

We walked around for a good 45 minutes or so before deciding it was time to recharge and stop for some lunch in the Italian district (I’m not sure if they call it Little Italy or not, thus I dub it the “district,” all due credit to Craig T. Nelson.). Had some drinks and good food at a cafe with tables lining the street. It was a very cool area and devoid of the massive throngs of tourists that increase in density the closer you get to the water. A nice change of pace.

Diving back into the tourist fray, we did some more walking and saw Hyde Street and its’ tourist-packed cable car, and the famous Lombard Street–the steep, windy stretch of street you’ve no doubt seen countless times even if you didn’t know what it was. It was, indeed, windy. It was also tough to take pictures of it without having eight people walk in front of you with their own cameras. I’m pretty sure I saw Rufus again there. CURSE HIM! 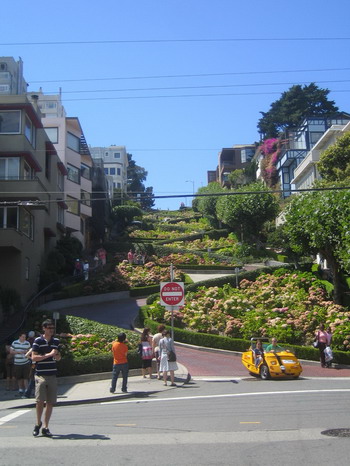 Back behind the camera in the above shot, there’s a great, sweeping view of the city and Bay, Coit Tower looming above it all. Alas, I cannot locate the image I took when I turned away from Lombard Street, so you’ll have to imagine it all in your head (or go to the Image Gallery). You’ll be fine.

Overwhelmed by the intense hairpin curves of Lombard, we immediately headed to a bar and had a few too many brews whilst watching rugby and talking to the Irish owner of the place. His brogue seemed to get more pronounced as our alcohol consumption increased, making him almost unintelligible, but I did glean a bit of wisdom about beer that comes in green bottles. I believe “shite” is the term he used to describe all such beverages, elaborating on the increased exposure to light inherent in the green bottle resulting in a far lower-quality beer. I felt fantastic about having had a Heineken for lunch. The bar, by the way, was great–something that’d be right at home back in Ireland (as I’m sure was the owner’s intent). There are far too few of these bars, and far too many of the techno-nightclub with $11 beers. Then again, if there were a lot more of the pub-style places, they wouldn’t be as sweet when you do get to them. 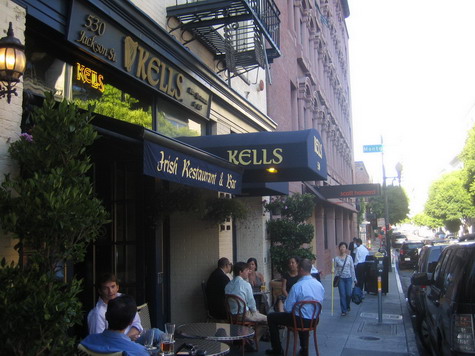 After Martha regaled us of tales of her encounters with jockeys (don’t ask), we decided six beers was enough and made ready our departure. On second thought, it might’ve been the arrival of Martha’s friend Kelly that prompted our exit, which was probably for the best. We hopped into a cab and headed off to the Mission District for dinner at a Mexican place (when in Rome, amirite?) featuring authentic, well, Mexican food. Add a couple margaritas to the tally there.

I should add that the cab ride to the Mexican place should be featured at amusement parks everywhere as the “San Francisco Cab Ride of Death.” Throw together a foreign cab driver straight out of Grand Theft Auto and the sizable hills that are the San Fran streets and you’ve got yourself a recipe for narrowly-avoided disaster. The “narrowly-avoided” part means we look back on it as having been “fun.” That leads me into this. We headed to what I remember being a “Cuban liberation front”-themed bar somewhere in San Fran (I’m not sure where we were). I forget its’ name, but I’m relatively positive it contained the word “revolution.”

After imbibing for a bit, we caught another cab ride with a middle-aged guy who was clearly on Ecstacy and/or speed. He drove just as crazily as the first guy, but with the added bonus of telling us all about San Fran and its’ vibrant music and club scene…with the speed of that Micro Machines guy.

Once back at the hotel, I ejected out of the cab and bade farewell to Martha and Kelly before heading in to make a sweet-ass post on my website and watch about 5 minutes of SportsCenter before falling fast asleep, dreaming of what the next day may bring…I dreamt of the deadly redwood squirrel.