Artist’s rendering of author’s face
against the window: 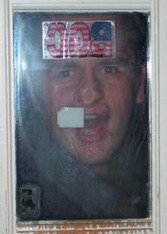 Discomfort aside, there were some spectacular views beneath our flight-path, the highlights being the expansive Yosemite Park, the Sierra Nevada’s, and Lake Powell in Utah. I have yet to visit the central U.S., and the breathtaking aerial vistas were enough to convince me to schedule a trip out there in the not-too-distant future. Even from 30,000 feet, there’s a true sense of primeval peace and tranquility in that environment, something I desperately need to offset the mind-numbing cacophony of city living. I can only take so much of the punk kids with firecrackers, car accidents, police sirens and the 487 motorcycles that drive by my apartment daily. 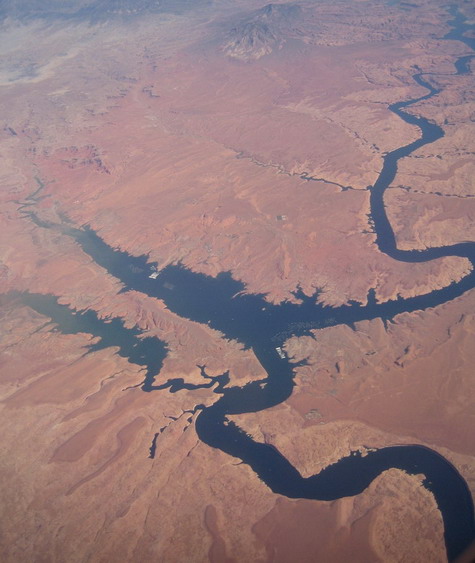 Digress? Yes. Onward. Shortly before touching down at San Fran International, we flew over Oakland, where I’d be traveling two days’ hence. It looked about what I’d imagined–tightly-clustered, run-down houses undoubtedly populated by all manner of crack fiend and gang member. Not that I’m into stereotypes or anything, but what are your immediate thoughts when Oaktown gets mentioned? The Raiders and gangs, right? Anyway, I’d have a chance to confirm or debunk my preconceptions in a couple of days. For now, it was touchdown in San Francisco.

After deplaning, I picked up my bag and hitched a roller coaster ride on an airport shuttle driven by Mr. Miyagi’s evil twin (seriously, the resemblance was uncanny, and I continue to curse myself for not having taken a picture of him). We almost ran over the same woman I swear was in Las Vegas when the EA crew was back there in 2005. Again, I regret not getting a picture of her, but here’s a reminder from the 2005 trip report. “I seen it!”

After that close call, the driver dropped me off at the Holiday Inn at Fisherman’s Wharf and I happily tipped him and entered the lobby…of the wrong hotel. Thanks a ton, Miyagi. I made a hasty exit after a brief tÃªte-Ã -tÃªte with the stuffy concierge and headed next door to my actual hotel, the Holiday Inn Express (which, strangely, was nicer than the Holiday Inn) to check in and meet briefly with my host for the week, Martha. I dropped my stuff in the room, looked out my window and–wouldn’t you know what I saw?–

…which just so happened to be my next destination. I quickly changed clothes and left the hotel, eventually arriving at Pier 33 to catch the ferry to the island. After boarding the boat, I headed up to the top deck and was immediately taken by the great, sweeping view of downtown San Francisco. It’s amazing how small an area the city occupies. It almost feels more like a seaside village nestled in the hills overlooking the Mediterranean rather than a major American metropolis.

I was taking pictures of the city and the approaching Alcatraz island when it dawned on me how jam-packed the boat was. People getting in the way of what surely would have been award-winning photographs was going to be the theme for much of the day. The herd began to shuffle off the boat after we docked, all of us making our way toward the booming but high voice of a park ranger standing on a crate, mic in hand to deliver an enthusiastic welcome to Alcatraz Island. 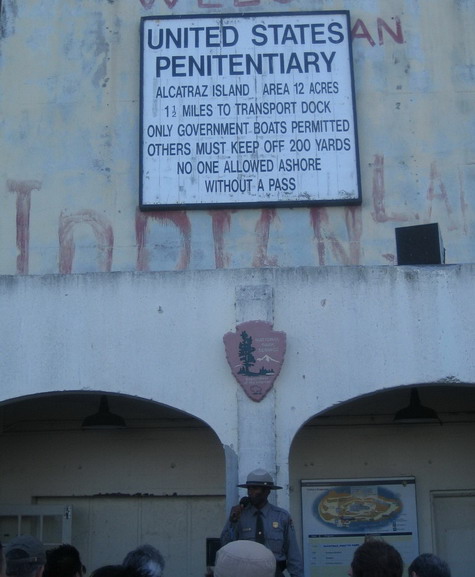 I patiently listened to the ranger and quickly took off to get ahead of the crowds and see the island. You had the option of just walking around the island or picking up the self-guiding audio tour, which came highly-recommended. I opted for the latter and embarked on a heck of a fun tour all over the cell house and prison grounds. My enjoyment of the tour was exceeded only by my delight in watching large groups of people get confused about where they’re supposed to be going during the tour. If you don’t keep up with the narrator, you’ll find yourself hopelessly out of sync and will likely end up in “the hole.” Yes, you will end up in solitary confinement for the rest of your life. They fail to mention this in the brochure. (Yes, I am serious. …)

I won’t go over all the nitty gritty of what I saw–that’s better done via the 8,054 pictures in my image gallery–so I’ll sum up my visit to the “Rock” with a few choice bullet points:

As the 400-some tourists started to filter their way back to the ferry, the fog San Fran is famous for steadily rolled in and enveloped the western half of the island. This weather phenomenon is amazing to see in and of itself, let alone in the context of a famed historical site backed by a view of the Golden Gate Bridge and the rest of the Bay Area. 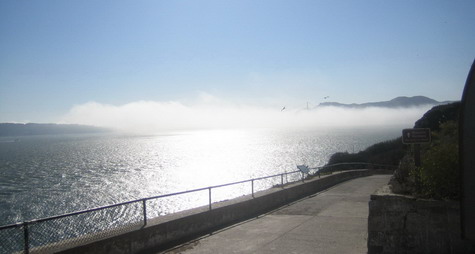 The rest of the day was relatively uneventful compared to that. I walked around Fisherman’s Wharf a bit that night, in search of all manner of delicious “eats.” I settled for a beer at a place called “Knuckle’s,” whose bartender pointed me in the direction of Joe’s Crab Shack (or something close to that), where I had some crab bisque in a delicious bread bowl. Bread bowls–the best invention since sliced, um, bread.

Seeing as how this recounting of my FIRST DAY is starting to rival War and Peace, I’m going to break this report up into more digestible segments (sounds delicious, doesn’t it). Stay tuned for Chapter 2 in my whirlwind tour of the Golden State.

4 thoughts on “Californication: A Novel”