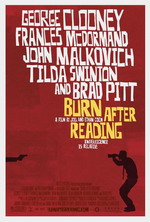 When the narrative suddenly shifts to revolting scenes of violence that interrupt any appreciation or enjoyment you might’ve been having, you’re left wondering exactly what the hell is going on and what the point of it all is. Maybe it’s just me. Maybe, as the CIA director in the final scene says, “I don’t know what just happened.” Is that the Coens’ way of justifying the bizarre sequence (if you can call that mess of a plot a “sequence”) of events that led us to that final scene? Is that your subtle way of telling us the whole point of your film? I must not be smart enough to grasp it. Had the preceding scenes not left me queasy, I might’ve had a little more appreciation for the apparent moral of the story. Maybe ten years from now, I’ll see this again and have a sudden revelation of its’ true brilliance that went underappreciated at its release.

If the whole thing weren’t so off-putting, I might be more inclined to talk more about the great acting performances from Clooney, Pitt, McDormand and the rest of the outstanding cast, but I’d rather just urge you to avoid renting or watching this and instead get No Country or O Brother Where Art Thou?, or The Big Lebowski, or Fargo, or any of the other brilliant films the Coens have made. Hell, I can’t really complain about the direction in Burn After Reading, it was pretty damn good. I just can’t get past the plot. I don’t know what the heck this was supposed to be. My final judgment: burn after watching. Preferably, before.