Well, there’s a lot of little, thematic stuff we can analyze this week, like the references to fan theories such as the time loop and purgatory (Time Loop Theory: Hurley makes references to “the loop” repeatedly, Jack says “there is no loop”; Purgatory Theory: Helen reading the obituaries and saying “no one ever says anything mean about people once they’re dead”), and the continued foreshadowing of the inevitable battle between Sawyer and Jack–but who cares about that stuff when you’ve got a huge, fluorescent door mural to analyze?! 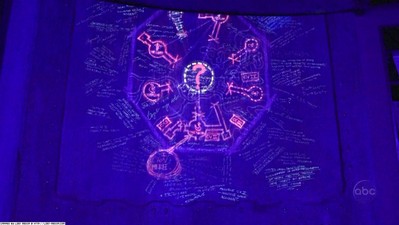 Now, there seem to be six “stations” on the mural (and a seventh scribbled out), with whoever drew the mural is in the current hatch, I’m assuming (“I AM HERE”). The logical conclusion is that these are the Dharma stations. In fact, it’s pretty much the only conclusion to make, as each station has its respective symbol drawn on it (the Swan for the hatch). The hatch appears to have been mapped out much better than the others, so it was drawn by someone who’s been there for a time (Desmond?). I think the chamber/area with the large “?” is probably what’s been blocked off by that cement wall in the hatch we have yet to see behind. The other six stations aren’t diagrammed as extensively. It looks like two of the stations, in dashed lines, have either not been found yet or are underground (or maybe underwater). We can clearly see the diagram of the medical station (labeled “THE STAFF”) from a couple episodes ago, the Tail section survivor station (“THE ARROW”) and of a new station: “THE FLAME.” WTF?

You can see the letters “CV” followed by a Roman numeral in numerous locations in the mural. I, II and III show up in and around Swan Station. You can also see two references to “Cerberus System.” The security system, no doubt.

Cerberus was a vicious beast that guarded the entrance to Hades and kept the living from entering the world of the dead. According to Apollodorus, Cerberus was a strange mixture of creatures: he had three heads of wild dogs, a dragon or serpent for a tail, and heads of snakes all over his back. Hesiod, though, says that Cerberus had fifty heads and devoured raw flesh.

Before all that crap with the black lights went down, Locke heard a static-y, female voice over the PA system, only snippets of which we could make out. I think I heard “unauthorized” at some point, and obviously the countdown. What is the purpose of this countdown? It would seem that the 4815162342 counter just so happened to go off at the same time as the black lights. I’m not sure that one was necessarily caused by the other. And, since we now know “Henry Gale” ain’t who he says he is, what did he enter into the computer? Maybe he did, in fact, cause this. There was a box of mac & cheese with the balloon (at least that’s the assumption based on what we saw). How did “Gale” get the macaroni & cheese from Swan Station? Did he draw the mural? If he did, he would probably know how to view (and let others view) it. 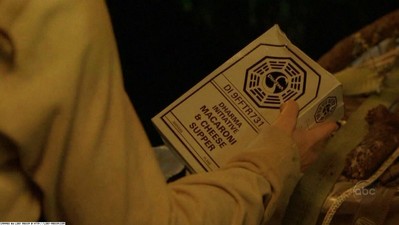 So Locke’s father is a con man, through and through. Locke’s lost a father and a wife now. Since the castaways all seem to have ties to each other, I’m wondering if Locke’s father is the “Sawyer” who conned Sawyer’s parents (mother killed by father, then father kills self). Seems logical.

The name of Locke’s home inspection company is “Welcome Home.” We see the logo on the door of his truck when he pulls up to the hotel to give his father the money. Nice metaphor for the choice Locke makes, eh? And note that it was the “Flightline Motel” and that an Oceanic plane soars overhead as Helen leaves Locke. That moment essentially sets Locke on the path that leads him to the island. 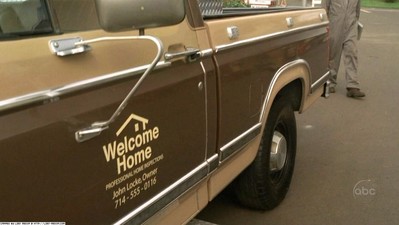 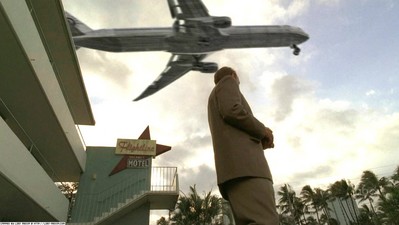