I’ve got a few ramblings about the current state of the NFL and sports in general, but let’s first turn our attention to Sunday’s Vikings-Bills game in Orchard Park, I’m struck again by how little I care about its’ outcome. Thank you, Mr. Tom Donahoe, for sapping all interest and enjoyment of Buffalo football out of me over the past several years. I’m eternally grateful that I no longer have to spend Sunday afternoons gritting my teeth and throwing objects at my television set. It will add years to my life and save me countless dollars on TV repairs.

That being said, the Bills looked pretty decent, aside from some sloppy penalties and special teams. The running game looked great; J.P. managed the game well despite some consistent pressure by Minnesota’s defensive line, and the overall gameplan by the coaches looked good.

I was encouraged to see Willis looking like he has some passion out there. His block on Vikings defensive tackle Kevin Williams late in the 2nd quarter allowed Losman to complete a deep pass to Lee Evans. If McGahee can get a bit more solid in the receiving game, he’ll cement his status as one of the best backs in the NFL. 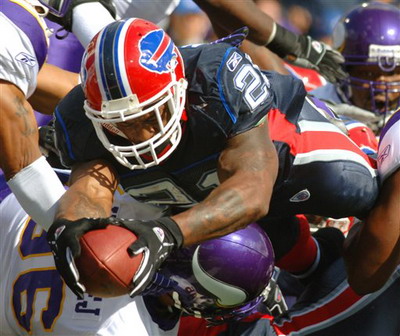 I’ve been hard on kicker Rian Lindell in the past, mainly because he seems to miss kicks at the worst possible time. All this despite having the best field goal percentage in the history of the Bills. He’s been very solid this season and, despite a wind-aided miss today, I’ve changed my tune. I’m glad we’ve got him for the moment.

With Miami and the Jets losing today, the Bills are right back in the AFC East race, thanks in no small part, I’m sure, to Bubba Clinton’s presence at the game. Surrounded by homely interns, he donned a Bills’ cap and giggled for most of the game, or at least during those times when his mouth wasn’t stuffed with hot dogs and ribs. 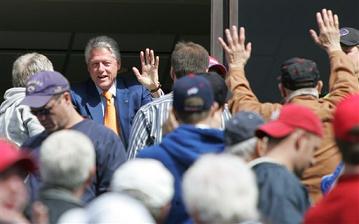 On to the ramblings…