Thanks to the magic of the Interwebz, Pearl Jam’s new album, Backspacer, has leaked one week early. Lest you think I’m a dastardly Internet villain intent on furthering the aims of piracy, know that I’ve already pre-ordered the fan club version of the album, the vinyl version of the album, and will most certainly be driving over to Target to pick the retail version up next Sunday. I most certainly appear to have a problem (the first step is admitting you have one). 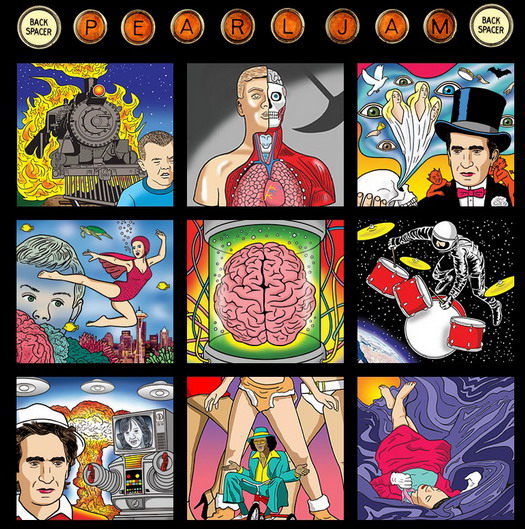 Anyway, on to my first reactions to PJ’s 9th studio album:

“Gonna See My Friend” (2:48) – A rocking opener that highlights the evolution of Ed’s voice into a raspy, strangled rock machine. (I don’t know what the hell that means.) That’s not a criticism; he sounds great, as does the band. Nothing complex about the music; it’s simple and to the point and is likely going to set the tone for the rest of the album. I wouldn’t mind a more developed Mike McCready solo on this one, though.

“Got Some” (3:02) – The first song we all heard from the album, way back in June on the first Tonight Show with Conan O’Brien, it definitely made clear the sound of the band has changed a bit; a sound more simple and “digestible” than their past stuff. That said, it rocked my socks off. The studio version could use a little more “snarl,” but it works. This’ll be blaring from my car speakers daily.

“The Fixer” (2:57) – This song’s been widely available for weeks so I’ve had some time to get used to it. There are elements I’d like to change (the opening ah ah ah’s, and the number of “yeah’s”), but it’s good. “When something’s gone, you gotta fight to get it back again.” A lyric perhaps indicative of Pearl Jam’s seeming desire to get back in the spotlight. A forthcoming Target commercial, a music video, and who knows what else coming from a band that’s shied away from corporate endorsement and mass media promotion. Anyway, this song should evolve nicely at the live shows.

“Johnny Guitar” (2:50) – There’ve been 30-second clips of each song floating around the Internet for a couple of weeks, and this is the first one that really grabbed me. Love the rapid-fire vocal delivery and the power guitar chords give it all a solid, dirty background. Altogether appropriate for a song about a tricycle-riding pimp.

“Just Breathe” (3:35) – Sounds like it’d be right at home on Vedder’s Into the Wild soundtrack. The strings backing Vedder’s folksky vocals and guitar lead work wonderfully, starting off with a simple arrangement that transitions into an emotional wave at a couple of points during the song. I’m not doing it justice with my poor sentence structure and vocabulary, so let’s just move on.

“Amongst the Waves” (3:58) – A soaring ballad that likely would’ve sounded a bit worse under Adam Kasper’s idiot hands (the dude behind the band’s wretchedly-produced self-titled album in 2006). The return of producer Brendan O’Brien is a welcome one, in my eyes (he produced Vs., Vitalogy, No Code, and Yield), and while it may be subtle, his clean, robust production gives a song like this a lot of life. (The lyrics, music and vocals may play a minor role as well, Jeff said sarcastically.) This is a strong one and I’d guess it’ll be hitting radio waves soon.

“Unthought Known” (4:08) – This really kicks into gear at the 53-second mark, as that hard piano note transitions us into a driving, emotional anthem. 5, 6, 7 years ago, I could never have imagined Pearl Jam sounding like this, both in terms of sound and the positive lyrics. But I love it; this might be my early favorite.

“Supersonic” (2:39) – This leaked a few weeks ago so I’m already familiar with it. Strikes me as a song that’d be a B-side in any other context, but it fits well with the overall upbeat, rockin’ tone of this album. “I wanna live my life with the volume full,” indeed.

“Speed of Sound” (3:33) – Love the demo version they released officially (for free) a few weeks back as part of the album cover reveal. Album version, not so much. I think my main problem is the percussion; it sounds a little too “honky tonk” country to me. The stripped-down, melancholy demo seems to fit the lyrics much better. Either way, I do like the lyrics.

“Force of Nature” (4:04) – Good, but I think it suffers from the same problem the album version of Speed of Sound does – too much going on musically. The lyrics are good, but they’d benefit more from a stripped-down arrangement. As it stands, it comes off as a forgettable (by Pearl Jam standards) power ballad.

“The End” (2:57) – Another song I never thought I’d hear from Pearl Jam (or Vedder, I should say, since it’s pretty much just him and a guitar backed by strings and brass), but it’s not one that would’ve worked with Ed’s voice back in his prime (pre-chain-smoking cigarettes, the idiot). His raspy, strained vocals echo the seeming desperation of the lyrics. Goosebumps. If this one doesn’t get you right in the heart, you’re not human.

Overall, the album suffers a bit of a dip after Unthought Known, but after having a tepid reaction to the various clips that’ve been released in the past few months, I’m pleasantly surprised and very pleased with Backspacer. You will no doubt be hearing it blare from my car speakers if you happen to be within a mile of me in North Buffalo this Fall. And undoubtedly, my reactions to all of these songs will evolve quickly through the 712 times I listen to the album this weekend. Stay tuned as my measured criticism turns into fawning approval of every nuance.

Go out and buy it September 20th at Target (and only there – unless you have a Mom & Pop record store nearby – you won’t find this baby anywhere else).