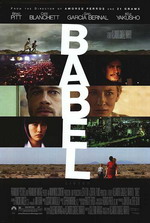 Much like the film Traffic, Babel tells seemingly disparate stories all loosely bound by a singular theme or event. Thematically, it’s how the bounds of family can be destroyed or strengthened by the tragedies that can result from a lack of understanding. The result–destruction or augmentation–is vastly different depending upon each of the cultures and races presented in the film. The tangible event that serves as the nexus for Babel’s stories is the purchase of a rifle by a poor, Moroccan goat farmer, with which to kill the jackals that thin out his herd. Tragedy results because of that purchase, and though I shan’t say more about the plot here, that event has implications from Morocco to America to Japan to Mexico. The story and plot are artfully crafted by director Alejandro GonzÃ¡lez IÃ±Ã¡rritu (21 Grams), not just in terms of visuals but more importantly in terms of the editing of the picture. It’s a difficult task to weave all of the stories together without making it feel like a jumbled, incoherent mess, but he’s pulled it off.

The beginning of the film feels like just that, but that may be the point. With the many different cultures and languages and customs all presented within the film’s first 20 minutes, you struggle to understand not just what characters are saying, but their motivations. One needs to carefully listen to everything as the story develops in order to eventually figure out how all of the stories are tied together. IÃ±Ã¡rritu may be telling us something with this (though I’m aided by the film’s tagline: “LISTEN” on the poster), in that communication–and not just the vocal kind–is the key to breaking down the walls between the world’s many cultures and uniting as a planet. That’s a bit of a loftier goal than is plainly presented in Babel, but it applies just the same.

There are some hopeful interludes in the film, but as a whole, it can be a depressing exercise in futility for some of our characters. It’s a tough film to embrace, but I think it can be a helpful prompt to understanding the differences between cultures and how many of our perceptions and actions need to change if we want a better existence for our children. And it may be as simple as listening to our own family members. If you can’t relate to or understand your own children, there may not be much hope for the rest of the world.