You may remember, about a year or so ago, I had to ward off an evil wife-beater with my trusty Ralph Kiner Hall of Fame bat (kind of). You can relive that experience here. Well, there was no bat involved this time, and my role was minimal, but I do have another TRUE STORY OF BUFFALO, NY!

So, I’m sitting on my couch and thoroughly enjoying the newest episode of Dirty Jobs, entitled “Monkey Caretaker,” when–what do I hear?–the screeching of tires followed by a loud WHAM! Having borne witness to three prior car accidents at the intersection outside my apartment, I knew this would be the fourth right away, just by the sound of it. I jumped to my feet, slapped on my sandals and hurried outside in time to see a large, black man yelling at a young, scrawny kid in a baseball cap at the top of his lungs. Such delightful barbs as “god damn it, man!” and “look at this shit!” filled the night air as my neighbors began to file out of their homes and ogle the scene.

As the big dude continued to yell (“dis is brand new, man!” and another “look at this shit!”), I started walking down the street to the intersection. When I got about 15 feet from the site of the wreck, the black guy looks over at me and yells, “what da fuck?!” Thinking this inquisition was directed at me, I yell out “Wwwwwhat?!” in the style of rap star Lil’ Jon. He apparently wasn’t directing his “what da fuck” at me, because he then returned to his “look at this shit!” mantra while frantically pacing around his car. His portly girlfriend sat there on the hood of the car, looking pretty shaken up. Fret not, everyone was fine. I was then tempted to yell out “Okaaaaay!” (again, Lil’ Jon style), but thought better of it, seeing as how the big dude outweighed me by about a hundred pounds. 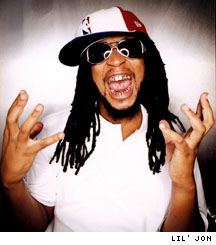 The police, fire trucks and ambulance arrived about 6 minutes later. The large dude and his girlfriend apparently wanted neck braces, so the paramedics got them collared up. Ahhhh, I can smell the frivolous lawsuit already. The scrawny kid in the hat kept quiet all this time, with a look on his face reminiscent of someone who just had lost their dog to a pack of ravenous wolves. I don’t know what it is about the phrase “ravenous wolves,” but I love it. I digress.

I stood amongst my neighbors for about 5-10 minutes, enjoying the conversations I heard, ranging from “wow, this intersection’s dangerous!” (say that out loud in the lispy voice of an old grandmother who’s not quite sure where she is) to “damn, son!” (I’m not trying to be funny with that–I heard that phrase, literally, at least seven times from three different people.) Having nothing to add to that genius discourse, I headed back up to my apartment and snapped a few pics of the scene from above. 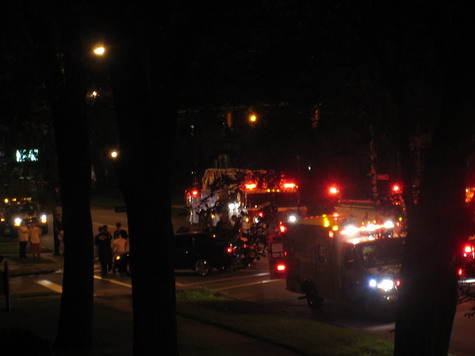 So not quite as exciting as my first True Story, but I hope you enjoyed it all the same. I know I did. Until next time, I leave you with a short but enlightening video clip. “Look at this shit!”

One thought on “Another True Story of Buffalo, NY”