I’ve never been to a Super Bowl; never to a Stanley Cup Final game; never to the World Cup; never to an MLB playoff game. I’ve never been witness to the in-stadium spectacle and attention one becomes a part of at such major sporting events, but I think I and the other 71,000 fans at Ralph Wilson Stadium today can now say we have. What a day for the Sabres, the Penguins, the sport of hockey, the NHL and the city of Buffalo. I don’t think I’ve ever enjoyed or been more blown away by a sporting event than I was by today’s NHL Winter Classic; it’s not something any of the fans in attendance will soon forget (nor those who watched on TV, for that matter). 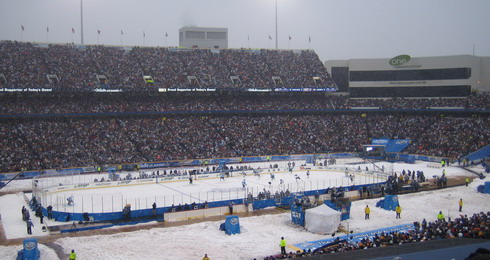 Among the many highlights:

The hockey itself (almost seems like an afterthought, doesn’t it?) wasn’t the high-flying offensive back-and-forth I’m sure the NHL would like, but the sight of professional players playing honest-to-goodness hockey in the middle of a football stadium in a light snowfall more than makes up for it. And you couldn’t do much better for a script. One goal each in regulation, a lively overtime, and a shootout decided on a goal by the league’s present and future poster boy, Sidney Crosby. A Sabres win might’ve made the day a bit sweeter, but not by much. I don’t know how it came across on NBC (or CBC, for my many Canadian readers), but this was a big-time sporting event and everyone involved pulled out all the stops to make it an all-timer, from NBC to the Bills and Sabres organizations to the fans. I hope you enjoyed it as much as I did.

External Image Galleries
They don’t quite capture the amateur flair and passion mine have (translated: they have more expensive cameras than I do).
ESPN
TSN
NHL.com
ViewImages

5 thoughts on “A true classic”