And that brings me to the concept of fate, which seems to be the central theme tonight. We overhear the Indian scientist talking to a colleague about a “wild card market,” in which there is a high degree of unpredictability. Myriad factors combine to make for all manner of outcomes in each market transaction–in each choice. Life is a wild card market, each choice we’re presented with offering an infinite array of possibilities and outcomes–an infinite number of paths, when a life’s worth of choices is taken into account. If we accept this basic concept to be true, that the sum of the choices we make in life can lead to myriad potential outcomes, then how do we reconcile that with the concept of fate? One can view fate as an anchor that pulls you toward an inevitable outcome–or one can view fate as the simple result of all the choices we make along the ride we call life. 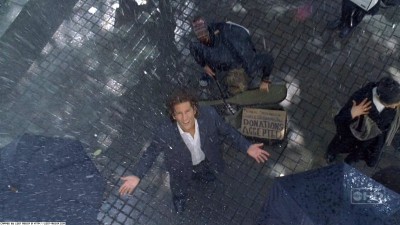 Desmond clearly seems to view it as an anchor, accepting Jeweler Woman’s matter-of-fact urging that his path in life is set; he can’t go back and ultimately change the decisions he’s made in his past. Of course, when he accepts this to be true, he ends up right back on the Island–his fate after the choices he made in leaving Penelope, joining the Royal Scots and embarking on a sailboat race. Despite Jeweler Woman’s statements on life’s “course corrections” resulting in the same fate regardless of our actions and choices, I’m guessing there’s a lesson for Desmond to learn.

Is it a lesson in not dwelling in the past? Or is this all a warning to throw fate to the wind and live in the present while making choices accordingly? Hey, I could be wrong, but I think this question is integral to the focus of the show. These castaways have repeatedly accepted their fates, whether resigning themselves to living the remainder of their lives on the Island or pushing a button every 108 minutes. Their future will undoubtedly hinge on whether they figure out they can make their own choices and change the future instead of sitting around waiting for their fates to arrive. Charlie’s fate may or may not be to meet his demise on the island from a lightning bolt or a hanging or drowning. If course corrections are going to result in his death anyway, Desmond’s wasting his time. But if he–along with the castaways and Others–can come to the realization that fate doesn’t have to be anchor and he can determine what happens, we may be in for some drastic and welcome new plot developments.

I haven’t specifically dealt with who that Jeweler Woman is and how she could be appearing in Des’s flashbacks (which I don’t think are actually flashbacks at all) because I simply don’t right now. I don’t recall having seen her on the show before, so her allegiance, if any, is unknown to me at this time. If I had to guess at this point, I’d say she’s yet another Island apparition courtesy of ole’ Cerberus. 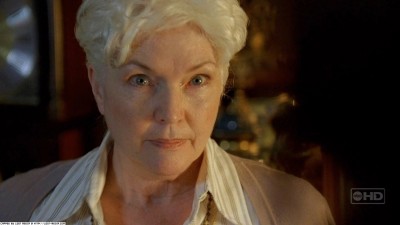 We’ve seen that the security system has the ability to scan and catalogue the castaways thoughts and memories (remember the scans of Eko?). If it can do that, it wouldn’t be much of a reach to assume it could knock Desmond out and make him believe he was reliving his past. Factoring in the fate equation, it would make sense because the Island–for whatever reason–has made it a point to keep our castaways present and accounted for on the island a number of times.

See you next week–it’s your destiny.

One thought on “Course Corrections”