I couldn’t have been more wrong about the film. I’m not sure where my inital reaction came from; perhaps it’s jealousy of his aforementioned blinding talent, but Lady in the Water is a terrific film. Despite reviews I’ve heard that the film is “different from anything he’s done before,” it fits right in with the rest of his deliberately-paced supernatural genre films, in terms of both aesthetics and quality. I can see how some who have seen it may have a negative reaction because of Shyamalan’s in-front-of-the-camera involvement, but he acquits himself rather well, and I found it easy to forget who he was as the story developed. 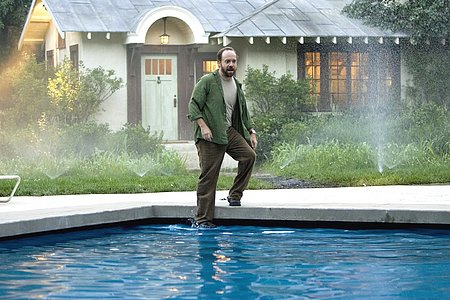 Having evolved from a bedtime story Shyamalan told his children, the film’s story centers around the downtrodden superintendent of an apartment complex, played beautifully (as one would expect) by Paul Giamatti. His encountering the titular lady in the water sets in motion a series of events that tells us something about finding one’s place and purpose in the world, not to mention something about vicious grass wolves and evil tree monkeys. (Yep.)

Featuring a cast of characters that serve as unique building blocks for the plot, each is written in such a way as to clearly identify that uniqueness. I can’t get too specific without giving plot details away, so I’ll say that much of the bizarre behavior we see from these people throughout the film all makes sense by the time the climax rolls around, as is typical of Shyamadingdong’s movies. There’s no huge “twist” at the film’s core this time around, though there are some more minor reveals of some important information. But the groundwork of Lady in the Water isn’t laid upon a falsehood or misdirection the way his previous films are, which is a refreshing change.

While elements are the story are a bit more whimsical than we’ve seen in most of his films, the acting is solid, for the most part, across the board, led by Giamatti’s measured performance as the superintendent. He’s been outstanding in most everything he’s done and Lady is no exception. Bryce Dallas Howard is also great, lending an ethereal quality to an already ethereal character. Direction is never a worry with Shyamalan at the helm, so no, er, worries there. I think his movies can work equally well with no audio, which is a testament to his power as a visual filmmaker. One of the things that makes his movies so watchable–repeatedly–is the composition of his shots. There’s a lot to take in. Now, I know you don’t go to a theater and say, “hey, look at that shot composition!”, but I think it’s something most people notice on a subconscious level.

If there’s anything negative, I could point to a lack of extensive character development (though, there is some) and the ending felt a little clipped, but listen, you’ve got grass wolves, evil tree monkeys, Paul Giamatti, a sea nymph and some great direction. Reasons enough to see Lady in the Water.