AAARRRGGHHHHHH!!!! THIS SHALL BE MY REVIEW OF THE NEW FILM 300, FEATURING ALL MANNER OF BRUTAL SLAUGHTER AT THE HANDS OF MIGHTY SPARTAAAAAA! YOU CAN ONLY BOW DOWN AND TREMBLE BEFORE THE MIGHT OF MY LITERARY WIZARDRY AS I BLOW YOUR MIND WITH MY BOMBASTIC PROSE! I ESPECIALLY LIKED DIRECTOR ZACK SNYDER’S USE OF SHADOWING TO HIGHLIGHT THEMATIC SHIFTS IN TONE!

If that’s a movie review on steroids, 300 is the film equivalent, ratcheting up testosterone levels to the point the male members of the audience are ready to start leaping over theater seats to do battle with one another, as King Leonidas leads his squad of 300 Spartans against the million-fold hordes of the Persian Empire in the legendary Battle of Thermopylae. If you’re looking for a history lesson, however, you may want to flip on the History Channel. 300 is more about romanticized sword-wielding and skull-bashing than accurately recounting one of the great battles in history. There’s lots of yelling and bloodletting and boobies, everything the modern American male needs, amirite? I’m guessing the ladies won’t mind the visuals either, as every male actor seems to have undergone a high-impact training regimen led by Arnold Schwarzenegger. 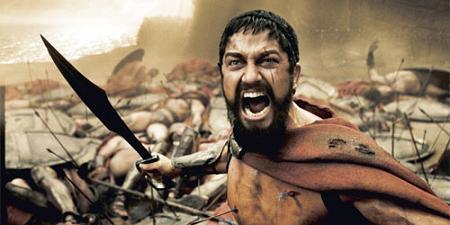 That superficiality aside, 300 is both pure entertainment and artistic masterpiece at once, Frank Miller’s graphic novel having been brought to life by director Zack Snyder and a team of visual artists. It’s nearly impossible to imagine a Hollywood film capturing the spirit and look of such a highly-stylized graphic novel (a more high-brow term for “comic book,” for those of you not in the know) like 300, but director Zack Snyder and his crew of cinematographers and digital artists have done just that, much like Robert Rodriguez did with one of Miller’s other notable works, Sin City. 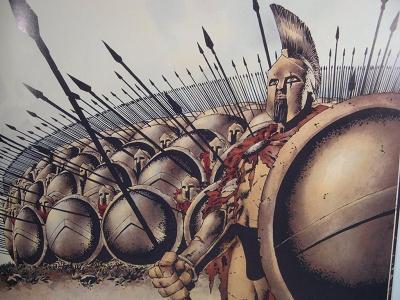 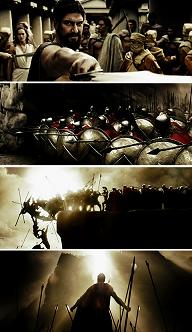 You’re not sure to see anything quite like it (outside of the aforementioned Sin City), and that’s almost reason enough to see something created in Hollywood these days. Each shot is a work of art in its own right, the medium being digital computer effects. The entire film was shot on sound stages with nothing more than a few environmental props and a green or blue-screen backdrop. All the surrounding scenery and wide shots were done via computer-generated visual effects. With one or two very minor exceptions, the effects integrate seamlessly with the live action actors. I’m not saying everything is “realistic,” per se, but there’s nothing in each shot that feels out of place. On a minor tangent here, be sure to catch this on IMAX, even if you’re not a fan of the genre. It’s an often-exhilarating experience to see it on the big–and I do mean “big”–screen.

If there’s anything to quibble with, it’s the lack of a fully-developed plot. While I recognize plot is the last thing to be concerned about in a film like this, a few more expository scenes could’ve given the film a bit more resonance both intellectually and emotionally. The scenes involving the political maneuvering back in Sparta are all good, but they exist mainly to let the audience catch a minute or two of their breath before plunging back into the carnage of Spartan/Persian combat. But this isn’t exactly Masterpiece Theater either. If you’re looking for tour de force acting performances, go see The Queen or Wild Hogs. Ahem. The actors in 300 are there solely to yell belligerently and engage in bloody combat to the death–and an excellent job they do of it. NOW, C’MON, WHO WANTS TO FIGHT ME?!!!