I keep having to rub my eyes after looking at that, not quite believing it could be true. I have no idea how the Sabres are up two games to none but dammit, I’m enjoying the hell out of watching them play. G Ryan Miller was on top of his game, and finally had some help from the underrated Sabres defense, including another save assist by Henrik Tallinder, or maybe it was just a “ball save” by Miller. (I’ll leave interpretations of that up to the reader.) Ottawa looked like they were on the power play despite being 5-on-5 for large stretches of the 3rd period but every time it looked like a Senator was going to find the back of the net, at the last possible second, a Sabre would come out of nowhere and flick the puck away or muscle their way in and disrupt the play. While it was exhilarating to see Buffalo hang onto that 1-goal lead as time ticked inexorably off the clock, I think I’m primed to have a heart attack at some point during the playoffs if they keep this up. 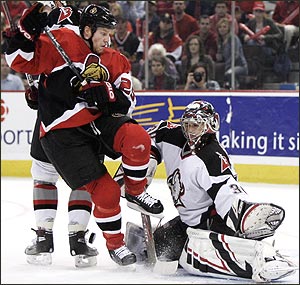 I’ll be in Toronto Wednesday night to see Pearl Jam, but I’ll be sure to give all the Canadians in attendance hell. Back on Thursday for Game 4. I’ll leave you with this link to some postgame reaction from some hockey fans both belaguered and elated. It’s great to be a Sabre fan right now.