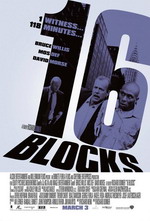 Richard Donner is a solid director with a great track record. The Lethal Weapon series. The Goonies. Conspiracy Theory. Die Hard With A Vengeance. Superman. He’s directing? Sign me up. 16 Blocks is by no means a black mark on his resume, but it ain’t Shakespeare either. Not that any of his films have been; he has a penchant for making smart, gritty action flicks that inject generous amounts of humor into the characters. 16 Blocks, while entertaining, is missing some of the humorous spirit and “smartness” that have made his previous films so enjoyably memorable.

Our plot features a broken-down alcoholic of a police detective in the twilight of his career (Willis) tasked with transporting a witness (Mos Def) in protective custody sixteen blocks (get it?!) to the courthouse so he can testify in a high-profile trial. Hilarity ensues as we find out Def is going to be testifying against a number of NYPD police detectives implicated in all manner of corrupt ventures. I leave the rest of the plot up to you, the viewer, to discover for yourself. 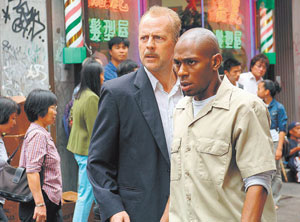 **SPOILER WARNING** Not exactly a flattering portrayal of the NYPD in 16 Blocks. I’d like to think there aren’t large groups of cops up to no good and willing to go to any lengths necessary to protect their illegal activities in a major metropolitan police force. A bit of a stretch there. Another stretch is David Morse’s actions at the end not making any sense; if he’s willing to kill witnesses in broad daylight, why wouldn’t he just shoot Willis down in the parking garage and make it look like Willis fired first? Instead, Willis persuades him with an argument describing the virtues of atoning for past misdeeds while Morse stares blankly at him. After Willis heads off, Morse phones one of his cronies and instructs him to shoot Willis in a crowded courthouse. What? **END SPOILER WARNING**

Anyway, 16 Blocks is worth a rental or entry into your Netflix queue. Like I said, it ain’t Shakespeare, but it’s got a capable cast and crew doing their best to entertain the average moviegoer. I was entertained.