I don’t have much to say about the “rescue by seagull” plot this week, so let’s get to something I’m more interested in: Locke and “The List.” Locke’s always been a guy to march to the beat of his own drum, one that seemed to be in tune with embracing the Island and its will. But that drumbeat is beginning to sound a lot like that of the Others. He knowingly set off the explosives that destroyed The Flame, he willingly sacrificed Mikhail to the barracks defense perimeter, but what really stood out to me was Mikhail’s discussion of “The List.” We’ve heard mentions of this List since season one. The kids taken by the Others were on The List; a number of the Tail section survivors were on a list; Jack, Kate, Hurley and Sawyer were on a list. I’ll have to confirm this, but I believe an Other mentioned that Locke was on a list at one time as well. [edit: Ben told Locke [the Others] were coming to get him back in season two. He’s on their list. Thanks to Jombi.] 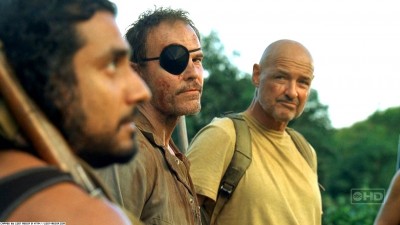 So what? Back in the season two finale, one of the Others made mention of “Jacob’s list.” Based on the mounting evidence, “Jacob” sounds like the ultimate leader of the Others. Whether he’s an actual person controlling events from afar or it’s simply a concept or ideal that the Others rally around, this “Jacob” (a “magnificent man,” in Mikhail’s words) seems to be the guiding force in their pursuits. It’s oft been wondered how the Others chose who they were going to take. What made one castaway different from another? If Ben feels the Others are “the good guys,” what makes those not on the List the “bad guys?” Mikhail spells it out for us by telling Kate (and those not on the List by proxy) that she’s “flawed, angry, weak,” and “frightened.” He goes on to refer to the other castaways as “your people,” as if there were a fundamental cultural, genetic or ethnic difference between those on the List and those that aren’t. Mikhail differentiates Locke from the rest of the castaways by starting to say “the John Locke [he] knew was”….I don’t know, because Rousseau rudely cuts him off and deprives the audience of another clue. [edit #2: Mikhail appeared to be in the middle of saying “para-” before being cut off. Paralyzed. Another thanks to Jombi the Wonderdog. I guess that’s not as mysterious and layered with meaning as I’d thought, but it illustrates the fact that the Others know all about the castaways and their lives before the crash.]

My interpretation of Mikhail’s comments is that Locke is considered one of the good guys that the Others want, but that he’s wandered off the path during his time with the tainted castaways. Where does this get us? If Locke truly is one of the untainted and chosen few, he may be warming to the concept and thus will do whatever it takes to align himself with the goals and ideals of the Others. Mikhail and Miss Klugh were clearly willing to die to protect those ideals and the “right” way of life. Mikhail took care of Klugh, and Locke took care of Mikhail. With a Locke-centric episode next week, I’m looking forward to what he’ll do next to confirm or deny my suspicions. Will he “go the right way?” HA HA.

3 thoughts on “You're going the right way”