Confessing for one’s sins is the overriding thematic element in Lost’s latest episode, though exactly what sins one must confess for comes into question by the end of tonight’s show. An unrepentant Eko, when finally taking the chance to confess his sins to his “brother,” instead clings to the belief that he did what he had to do to survive and is proud of the choices he was forced to make in the life “he was given.” 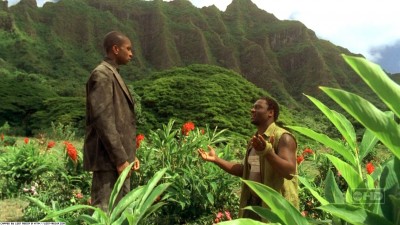 But all his crimes, all the blood on his hands, all the corpses at his feet are not what the Island would like Eko to confess. For now, I think we have finally gained a full view of the Island itself–or it’s avatar at the least. The black smoke/Cerberus/security system/monster is that avatar. It is the voice and hand of the Island itself. Why it’s there and how it figures into the dynamics of the populations on the island have yet to be determined, but it seems clear to me that we’re seeing the Island in action.

Of course, the black smoke could simply be one of the Dharma/Hanso projects that escaped from its’ hatch and has been wreaking havoc ever since. But that explanation is much, much too logical.

In Greek mythology, Cerberus was the hound of Hadesâ€”a monstrous three-headed dog (sometimes said to have 50 or 100 heads) with a snake for a tail and serpentine mane.

He guarded the gate to Hades (the Greek underworld) and ensured that the dead could not leave and the living could not enter. His sister was the Chimera and his brother was Orthrus. He is the offspring of Echidna and Typhon.

What we do know, aside from my delusions of grandeur, is that Cerberus can take the form of other humans and beings and entities and “heads,” and has been doing so for quite some time. It’s taken on the form of Jack’s father (which it undoubtedly plucked from his casket), Eko’s brother (plucked from the plane), a “bright light” (to Locke), the black horse (to Kate), and God knows what else (but I don’t think it took on the appearance of “Dave;” I think that was all in Hurley’s head). We also know exactly what happened to the pilot in the series premiere, made plain by Cerberus using Eko as its’ personal beat-stick. 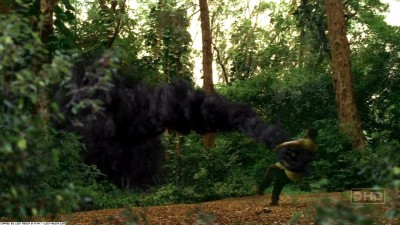 It’s also unclear, as I mentioned before, what exactly Eko should have been confessing. What was the Island/his brother after, exactly? The fact that it said Eko was speaking to him as if he was his brother perhaps means that the Island doesn’t excuse what Eko did in his life. His brother would have understood what Eko was trying to say. The Island didn’t like that explanation; which you’d think meant the Island wanted him to confess for the killing he’d done. But that’s not entirely clear yet.

So, whether Cerberus is a Dharma experiment gone wrong or a supernatural manifestation of a land mass’ will, it will be interesting to see how it’ll figure in the future of our castaways, who are “next,” and in the pasts of those who’ve lived on the Island for some time (Rousseau’s crew, the Others, the Dharma Initiative).

Speaking of the Others, we get more concrete confirmation of the factions that lie within what once appeared to be a tight-knit band of mysterious tribal warriors in season one. Juliet finally lays bare her intentions to Jack vis a vis her taped video message. I didn’t expect this to happen so soon in the season, which makes me wonder where exactly we’re headed come February when the show resumes (after next week’s “Fall Season Finale,” anyway). 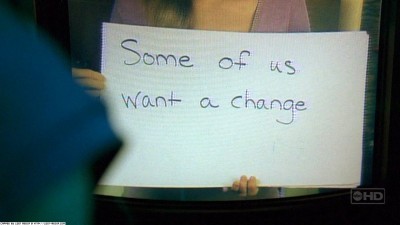 I’ve spoken about the Others clearly having contact with the outside world (“the comms are down,” the Red Sox tape, the food, etc.), but what seems apparent now is that they can’t leave the Island. I’m not sure whether it’s because of a set of precepts they live by or if they can’t physically leave the Island. Ben and the Others can’t return to the mainland, else Ben would simply check into the nearest hospital for some good, old-fashioned tumor surgery instead of having to rely on a “spinal surgeon who fell out of the sky.”

Of course, if Michael, Walt and Vincent were allowed to leave the Island (as far as we know), I’d lean toward attributing the Others’ staying on the Island to their own laws or beliefs. They must feel like they should never leave. But why? I’m wondering if Ben may know something the factions within the Others ranks don’t–perhaps Juliet and her band of rebels don’t know why they can’t leave. Perhaps Ben’s keeping them their for their own good. If I try to elaborate much more on this, my head is going to start to hurt.

Moving right along, then…. Did I forget to mention Eko’s dead? Didn’t see that one coming! It looks like Cerberus granted Eko access to the “underworld” and sent him off to be with his brother. Before he died, we found out why he was so intent on building that church during a flashback, when the nurse in his village told him he “owed [his brother] one church.”

Next week, “we’re next.” Or I’m next–er, they’re next–er, Locke’s next. Someone’s next, and they better bring a big-ass stick if they wanna go toe-to-toe with Mr. Cerberus.

4 thoughts on “Wrestling with Demons”