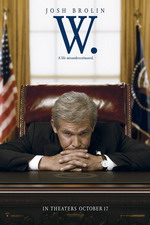 I can’t say it’s unbiased, but W.’s George W. Bush manages to be an objective portrayal of a underestimated man as well as a wholehearted indictment of his presidency. Not the skewering I expected, by any means. Stone even seems to have some sympathy for Bush, painting those with who he surrounded himself as the real bad guys, save an outmatched Colin Powell, while Bush does his best to do the right thing for “freedom and democracy.” The problem is, just between you me and Oliver, he’s kinda dumb. 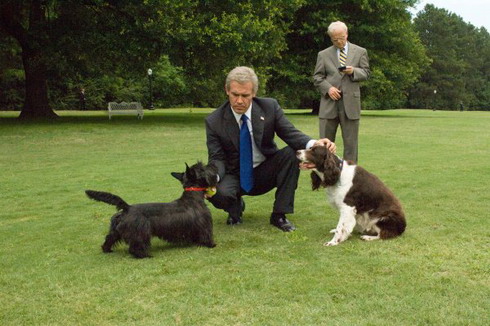 You won’t feel any better about where the country’s at and Dubya’s part in it by the time the credits roll, but you may have a better understanding of how a man who’s become so reviled actually became President. There’s a reason for it, and you can’t blame it on a conspiracy or media propaganda or Florida election fraud. The problem is, he should’ve stayed in Texas running the MLB’s Rangers, the dream job he always wanted. It was his desire to be respected by his father that drove him to his current course, a decision both Bush’s may be regretting now.

Thematic discussion aside, the movie as a whole is good but it’s not one that I’ll be thinking about much in a week’s time. It’s entertaining and makes its’ point coherently, but it’s not in-depth or epic enough to truly be a “great” film. Some of the acting borders on stand-up comedy impression work at times, most notably in the cases of Scott Glenn’s Donald Rumsfeld and Thandie Newton’s over-the-top Condoleeza Rice. And in terms of “plot,” the most illuminating stuff comes in the form of the interplay between Bush Sr. (Cromwell) and W. (Brolin). That strained relationship forms the basis for W’s desire to become President. The remaining story involves Bush’s decision to start the current Iraq war, and most everyone knows the background on that already.

Brolin is sure to get an Oscar nomination come awards season, but I think that may have more to do with liberal Hollywood enjoying any attempt to poke fun at Bush than it is about his acting ability. Regardless, Brolin does a fine job as Bush, managing to play an authentic representation of the man without it becoming a cheap impersonation.

Richard Dreyfuss is also great as Cheney, playing his subtle manipulations of W. perfectly (assuming, of course, that he’s a manipulative bastard in reality). Newton is a terrible actress that somehow keeps getting work, much like Eva Mendes. She should take her act to Vegas. I’m sure she’d do well as a celebrity impersonator. Her work here is more caricature of Rice than it is character study. Scott Glenn performs similarly as Rumsfeld, a man who certainly makes it easy to form caricatures of in the form of a beady-eyed ratfink. The rest of the cast is good but without any performances that will stick out in your mind. Jeffrey Wright is good as the only sensible man in the administration, Colin Powell, but again, there’s nothing here that’ll set your hair on fire.

W. is eminently watchable and interesting, but not a flick you’re going to be talking about for years to come. It’s worth a watch in light of the fact we’re in the height of political season, and in the final days of the Bush administration, but don’t expect another Platoon or JFK.