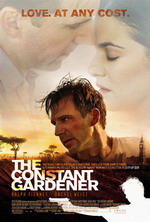 A magnificent film by City of God director Fernando Mereilles, The Constant Gardener tells the story of a husband and wife separated by brutal tragedy but eventually reunited through the husband’s discovery of not only a far-reaching conspiracy to commit crimes against humanity, but also the life’s work of his wife–and, therein, he finds a connection to her that transcends any mortal coil. Look at me, I sound like a film critic.

If you want to try and classify what kind of genre The Constant Gardener fits into, you’ll have a tough time, though my guess is most will call it a thriller wrapped in the love story of Fiennes’ and Weisz’ characters, the former a British diplomat, the latter a political activist investigating the involvement of global pharmaceutical companies in African drug trials. It’s difficult to describe the setup to the film, as it involves the biggest plot point of all, so I’ll avoid that, but what I will say is that the film centers on Fiennes’ character picking up his wife’s investigation into the aforementioned phamaceutical companies, and their relation with the government he works for. Intercut along the way are flashbacks to moments with his wife, and they are just as much a part of his “investigation” as the work he’s doing in Africa trying to track down leads and discover just what she was working on. Fiennes’ character has a prediliction for gardening–constantly, you might say (o cheerio, good chap, that was spot-on!), and it’s the very apparent metaphor for his investigation. What I find particularly interesting about his character, Justin Quayle, is that Fiennes isn’t playing the rugged, heroic everyman out to save the world character so often found in suspense thrillers. He’s no less driven, but he carries himself with a quiet intensity that can be just as powerful as an over-the-top superhero-type portrayal (the image below notwithstanding). 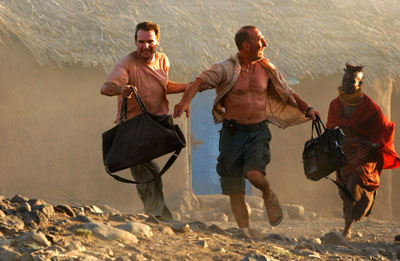 Gardener’s visuals range from the stark whites and greys of Europe to the rich palatte inherent in Africa, and taking it all in is just as important as delving into the plot itself, which has the writing of novelist John le CarrÃ© to thank for its often-dense exposition (though it’s by no means boring). I think many viewers will get turned off to that, and find the entire movie somewhat tedious to get through. But, I think that’s a matter of taste. It has elements of many different genres, and it’s probably chiefly a mystery-action thriller, but you’re not going to find explosions, gun battles, or car chases (well, there is one chase) here; it’s about the quest Fiennes’ embarks upon, fueled by the rediscovery of the love he has for his wife. And I don’t mean it to sound like a chick flick (but it can certainly work on that level). But listen, this movie won’t be for everyone. It’s not a popcorn flick, it’s not an event film, it’s not meant to dazzle your eyes and ears. If you appreciate the art of film itself, I think you’ll love The Constant Gardener.

One thought on “The Constant Gardener | A”