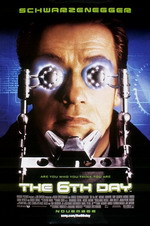 Where to begin with this steaming turd? Well, it starts off Arnold trying desperately to act in a “family setting;” waking up, bantering with the wife, horsing around with his kids and going off to work. Nevermind that he has all the acting ability of a 1950’s robot. He wears this wide-eyed, dopey smile throughout the opening scenes, as if he’s overdosed on Valium. He then travels to work with his friend, played by Michael Rapaport in a ridiculous haircut, during which he continues to wear his robot/Valium smile. “Everything is fine, my friend! Let us laugh together! Ha ha ha!”

Then he flies around in some crazy CG helicopter before all hell breaks loose. The story revolves around some crap about human cloning or something, I’m not really sure. I was distracted by the horrible editing and direction. This might be one of the worst scripts, dialogue-wise, that I’ve ever borne witness to, nevermind the horrible acting across the board. Why these actors would agree to do this movie is beyond me, unless of course you consider their likely paycheck. Robert freaking Duvall is in this movie!

What really gets me, though, is that the idea behind The 6th Day is actually a good one. The problem is, when you get a guy like Schwarzenegger involved, all pretense of reality goes out the window. Unless Arnold is playing a killer cyborg or kickass commando, you just can’t believe him. The scenes with Arnold acting alone are bad enough, but then you throw his clone into the mix. So instead of just one horrible acting performance by Arnold, you get two at once! Here’s a quick snippet of dialogue between the two Arnolds:

The sad thing is, who knows what a decent actor could have done with the role? But even on top of that, the script is awful, the direction is awful, the acting is awful, the special effects are awful. You name it, they effed it up. Enjoy it on cable as soon as you can.