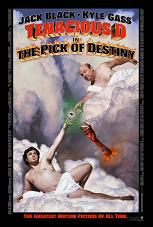 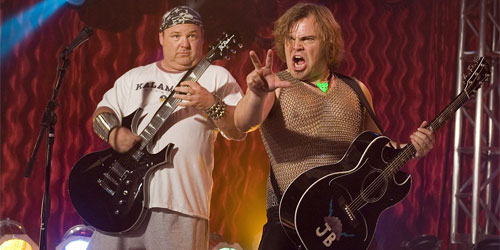 They’ve built a dedicated, cult audience along the way, one that’s become intimately familiar with their worship of the Rock and the tasty grooves KG lays down. But if you haven’t followed them for a couple of years, you’re not going to know what the hell is going on in The Pick of Destiny. There are too many inside jokes and gags that only those intimately familiar with The D will fully appreciate. That isn’t to say that broader audiences won’t find quite a few things to laugh at, but I’m guessing there may be some widespread bewilderment and incredulity at some of the stuff going on. As a D fan, I don’t really care about that except in the context of getting another Tenacious D movie. If this doesn’t bust up the box office, we may not see more of The D for some time. This video might be a good starting point for those with no knowledge of the utter majesty that is The D:

It’s still a well-built story, if a bit on the short side. I would’ve preferred a bit more character development early on (that would sound pretty funny to a D fan), and the inclusion of some more stuff from their old HBO shows to fill in some of the dead spots in the flick (Road Gig, Jesus Ranch, etc.). But enough of this staid analysis–this movie rocks your socks off and nearly blows your mind. If you’ve got a hankering for The D, be sure to pick up the soundtrack as well, a track from which is the most current Song of the Moment. RAWK!