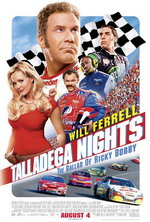 Will Ferrell reunites with the crew that made Anchorman one of the funniest movies ever in the recorded history of space-time to bring theater-goers Talladega Nights: The Ballad of Ricky Bobby. Ferrell plays the titular Ricky Bobby, a NASCAR driver who believes that “if you don’t finish first, you’re last.” Ricky Bobby is the toast of the NASCAR circuit, has millions in product endorsements and race winnings, a red-hot, smokin’ wife, and two spitfire kids: Walker and Texas Ranger.

Things start to go bad for Ricky when a French driver (Cohen) comes over from Formula-1 racing and mops the floor with him. Unfortunately, this is about when the movie starts to go bad as well. There are far too many dead moments, generally those scenes having to do with Ricky and his father (played by Gary Cole) and the rekindling of their strained relationship. It’s not that they’re even trying to put a heartwarming subplot into the flick, it’s just that there aren’t any jokes to go along with it. There’s just nothing of substance in a lot of these scenes. Except for the cougar.

Another big problem is that, as utterly hilarious as a lot of Nights’ best moments are, you’ve probably already seen all of them if you’ve watched the trailer. I’ll never understand why marketing executives give so much away in a lot of modern day movie trailers. And there’s more than a few jokes that fall flat because they don’t make any sense or just seem half-assed. There’s a subplot involving one of the crewmembers of Ricky’s pit crew, who will constantly make bizarre comments about peaches and death that never goes anywhere, and then there’s an Applebee’s commercial in the middle of a race that should be funny but isn’t. I still laughed out loud through much of the flick, but having seen most of the gags in the trailer already may have subtracted a guffaw or two out of my moviegoing experience. Guffaw. 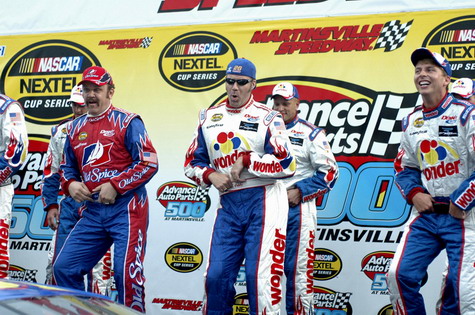 There’s still a lot to love about Talladega Nights. Walker and Texas Ranger, Ricky’s sons, are particularly good when hurling insults at their frail grandfather across the dinner table. And, of course, there’s Ferrell. Likely the funniest (not necessarily the most intelligent) actor working in Hollywood today, he’s as good as ever here. He doesn’t always have enough to work with in some scenes (i.e. the “slow” moments aforementioned), but he’s still at the top of his game. What’s funnier than Will Ferrell running around a racetrack in his underwear screaming for the assistance of Tom Cruise and his “witchcraft” to put out the invisible fire burning him alive? You’re exactly right: nothing. So, at the end of the day, it’s not quite in Anchorman’s league, but Talladega Nights has enough going for it to warrant gobbling up your nine bucks at the multiplex.

One thought on “Talladega Nights: The Ballad of Ricky Bobby | B+”