Encore 1: Wasted Reprise, Man Of The Hour, Elderly Woman, State Of Love And Trust, Do The Evolution, Alive

Much of Wednesday was spent reflecting on Tuesday night’s show and walking around the city of Toronto in search of activities to collect fantastic, new anecdotes for this tale. Alas, we walked around a ton, we did nothing more than go to the Royal Ontario Museum and have dinner in the upscale 360Â° restaurant at the top of the CN Tower. No outlandish anecdotes featuring gunfights or drunken brawling or naked women. But, ya know, come to think of it, there may have been one or all of those after the show. I’ll get to that in a bit.

My Morning Jacket opened again, very similar-sounding set to the previous night’s, but very good all around. The lead singer is a nut, and his high, wailing vocals can induce chills. Very intense performance, and you could tell right off the bat that tonight’s crowd was going to be much better than Tuesday’s.

Master/Slave played again as the band hit the stage, and they started into what is probably my favorite opener: Release. The crowd was into it right from the get-go, matching Ed’s singing line for line, everyone screaming in unison with Ed’s soaring vocals. Tonight’s crowd had already blown Tuesday’s out of the water by the end of the song. I should probably note that my judgment of events might’ve been impaired by this point (yes, this early in the show) due to the copious amounts of wine drank at 360Â°. The ridiculous amount of ganja-smoking in the arena didn’t help matters any further. The band, in addition to the lasers mentioned in last night’s review, had smoke machines in the arena for certain songs, but I’m not sure they were necessary on Wednesday. The thick clouds of weed smoke more than took care of any atmosphere the band was going for with the machines.

After Release, the setlist followed much the same pattern as last night’s, with World Wide Suicide, Severed Hand and Life Wasted. They were all great, but I was hoping for the songs they hadn’t played on the new album, Army Reserve in particular. Ah well, I can’t complain too much, as they all sounded great. Unemployable was a big improvement from last night’s rendition, the band in tune and together this time. Dissident was played, and while I know it’s a popular song and crowd favorite, I’m ready for it to be retired. It just doesn’t have the same gravitas and emotion after having heard it so many times over the years, both in studio and live.

The highlight of the main set was I Got Id (or Shit, depending upon your preference), quite possibly my favorite Pearl Jam song, written along with Neil Young. After the outstanding performance of the song, Ed let us all in on “a secret,” and played the chorus to I Got Id and followed it with the chorus to Neil Young’s Cinammon Girl, pointing out their uncanny similarity. Very cool moment.

Also in the main set was the rarely-played Low Light, and the infrequency of its appearance in setlists is probably due to the fact that the band screws it up every time they play it. Not tonight; they nailed it. They also nailed the hell out of Whipping, which incited the crowd into a stark-raving frenzy, myself included. It was preceded by a short improv, featuring the lyrics “I don’t wanna go…from To-ron-toooo! Don’t wanna gooo!”

The encores were great, exceeding last night’s if that’s possible. Ed made note of two flags in the audience, one Canadian (two rows in front of me) and one Brazilian, in the course of speaking about the world and what’s going on. He told each group that they should get together and “make babies…or something” in the interests of world relations. 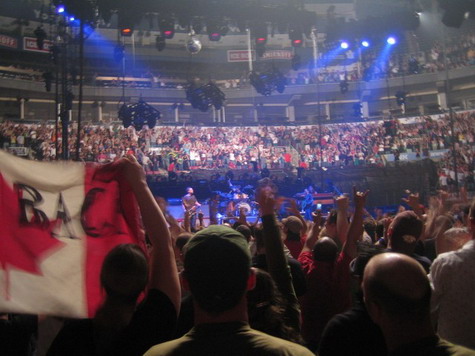 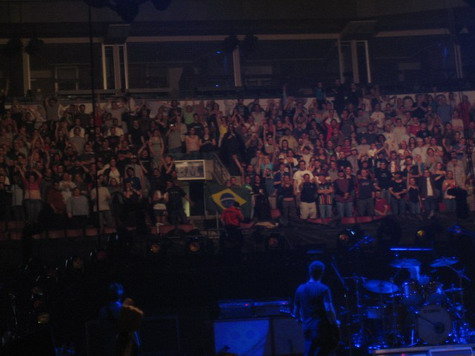 At some point, I’m not sure if it was at the end of Rearviewmirror or some other extended-jam song, Ed threw his mic stand up in the air at the end of the song and it hit Jeff right on his foot. He hobbled off the stage with the rest of the band, all of them laughing. It was clear at this time that Ed was absolutely wasted. He’d been swigging out of his wine bottle the entire night, and I think he broke out a second bottle about halfway through the set. It got so bad that he was laughing at something keyboardist Boom Gaspar said or did just before Yellow Ledbetter. Ed struggled to get out the lyrics over his laughter, finally getting it together to sing a Beast of Burden (Rolling Stones) tag on the end and put an emotional capper on the incredible 2-night stand in Toronto. Lots of smiles and laughs all around as the band made their curtain call and left the stage. This band gives it everything they’ve got at each show, and May 20th in Cleveland can’t get here soon enough. 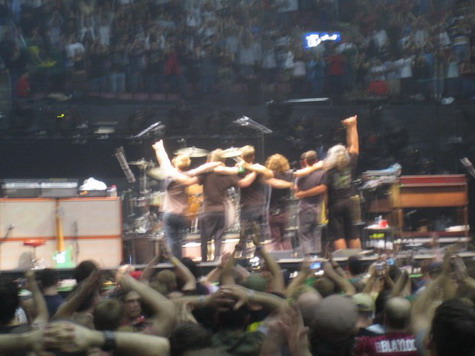 Quick notes: we made our way to some dance club after the show, filled with lots of hoochies and large black dudes who may or may not have been bouncers. The obnoxious DJ persuaded a bunch of girls up onto the bar with the promise of free shots. Unfortunately, I’m not sure anyone wanted to see the girls that did go up actually up on the bar. Anyway, I got my dance and drink on as only I can. I was tempted to start breakdancing, but thought better of it after realizing I’m an out-of-shape white guy in a ghetto dance club. The night was capped off with a bag of chips and a Snapple as only Toronto can provide at 3 in the morning.

The band hits the stage at 8:50PM local time, entering the stage with “Master/Slave” playing as the intro music over the P.A. “Severed Hand” now features stage effects including smoke and lasers. The first set clocks in at 100 minutes! “Wasted Reprise” premieres at this show, seguing into “Man of the Hour”. During “I Got Shit”, a drumstick flew out of Matt’s hand, hit Ed’s leg and landed in front of Stone. He looked down and grabbed it, holding it up excitedly as though he were in the audience and caught it. After “I Got Shit”, Ed told the crowd he had a secret to tell, that this won’t be on the bootlegs and first sang the chorus of “I Got Shit” by himself, then sang “I wanna be with a Cinnamon Girl, I want to live the rest of my life with a Cinnamon Girl”, hinting the similarity in the two choruses. During “State of Love and Trust” where Ed often goes over and head-butts or leans again Mike, Ed looked at Mike and leaned down like he was going to go over, but didn’t. Ed mentioned that Sean Kinney’s birthday was coming up and told the crowd he was going to count to three, and then the crowd would say, “Happy birthday Sean!”. He said they’d send Sean a video of it so he could watch it on the tour bus (Sean Kinney’s birthday is May 27, and Alice In Chains will be on tour in Europe) . It was then that he asked Kevin to make sure he was filming. Ed spoke directly into the camera as if he were talking to Sean, saying something like, “Hey Sean, we’re just here hanging out in Toronto, and we just wanted to say something to you…”. He then counted to three, and the crowd yelled “Happy birthday Sean!”. The wine bottle was passed back quite a ways during “Crazy Mary”. At one point in the encore, Matt whipped his sticks into the crowd behind the stage (maybe a litte harder than he intended), and then briefly pretended he was a fan who got hit in the eyes and had a stick stuck in each. Towards the end of “Fuckin’ Up”, Ed tried to lay down on Stone’s monitors and fell off. He sat up and remained there, snapping his fingers along, and drank a Heineken after the wine bottle was empty. Ed laughs so much during “Yellow Ledbetter” that it interrupts his singing. He laughed because there was a banner to his left that caught his eye, it said : “Impeach Bush. Pearl Jam For President”.