Encore 1: Do the Evolution, Jeremy, Come Back, Alive

Back in Toronto again. I’d last seen the band live in September of last year in, that’s right, Toronto. Since then, we’ve gotten a fantastic, new album and the announcement of a tour opening up with a 2-night stand in the Air Canada Centre in–you guessed it–Toronto.

Making our way onto the arena floor, we couldn’t help but notice the Maple Leaf Stanley Cup banners hung in the rafters. As the Sabres are in the middle of a Cup run, I felt it appropriate to show proper respect to our Cup-winning neighbors to the North. I’ll have some thoughts and recap of the events in the city in my second review, but let’s get right to the first night’s show. Opener My Morning Jacket, a rock band with a wailing lead singer that looks like a hillbilly, they unsuccessfully tried to get the crowd going with a short 45-minute set, but looks like they were having fun doing so. They’re alright, but I don’t think I’ll be buying their music.

About 20 minutes after MMJ left the stage, the arena lights went dark and Master/Slave (you can hear it on Ten before Once and after Release) came over the speakers, inciting the crowd into a relatively restrained frenzy. The band came out, said hello, and a pre-recorded loop started playing the beginning of Severed Hand. After about 5 loops, the band launched into a tight but relatively low-key rendition of the song, a track off the new album. Notable about the performance was the introduction of lasers–yes, freakin’ laserbeams–accompanying the regular lighting. Very cool effect.

That quickly segued into more new albums cuts: World Wide Suicide, Life Wasted, and Marker in the Sand. I’m not sure if it was all of the new songs or people were just tired, but the crowd seemed a bit restrained and lethargic up until after they finished Given to Fly and went into Betterman. I’m wondering how many Canadians even know the new album is out.

Anyway, as I said, once Betterman hit, the crowd really started getting into it, arms raised, voices shouting the lryics in unison as Ed sat back and listened, as has become customary during the song. Next up was an unusually early Even Flow, featuring Mike McCready’s customary extended guitar soloing, during which he ran a lap or two around the stage. By his standards, the solo was relatively laid-back, and the band seemed to follow suit, never really letting loose until Grievance and Not For You later in the show. That being said, it sounded as if they’d been playing together for months. There have been first shows of past tours that make it sound painfully obvious they’re out of practice (Missoula ’03 comes to mind). Not in Toronto; they sounded great (perhaps with the exception of Unemployable, which needs some work). 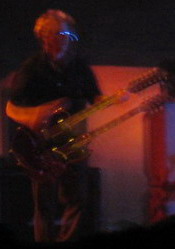 Quite possibly the highlight of night one, the band played a McCready-penned track off the new album, Inside Job. Marking the first-ever live performance of the song, the band made it special and played with quiet intensity, no one moreso than Mike, who shredded on a double-necked guitar. The best place to be at any Pearl Jam concert is right in front of Mike, who develops a relationship with the crowd over the course of the night, always in the moment and owning it.

Other notables of the night included a reworked version of Garden and the old-school Why Go, neither having been played on tour for far too long. Come Back, off the new album, was played for the first time and made me rethink most of the crowd not having heard the new album, as everyone went nuts when they heard the first notes and worked themselves into delirious frenzy as Ed crescendoed to the closing “woo-oo-oo-oo’s” at the end of the song. Really special.

The highlight of this show, looking back, were the encores (of which Come Back was included). Hitting a high point with Porch in the 2nd encore, the band led up to it with blistering versions of Do The Evolution, Jeremy and Alive (with the now-traditional “HEY!” chant at its end). Porch is a song that got kind of lost in the shuffle the last few tours, but the band seems determined to bring it back to the forefront this tour, even giving us a glimpse of Pearl Jam’s early touring past–the days when Ed climbed scaffolding and lept into crowds from 15 feet above the mosh pits. They’re all a bit older and wiser now, but that didn’t stop Ed from climbing a speaker and whipping his mic through the air, just like the old days.

They closed, as expected, with Yellow Ledbetter and a promise to see each other tomorrow night for what promised to be another outstanding show.

This is the first night of the first leg of the tour in support of Pearl Jam. The band hits the stage at 8:50PM local time, entering the stage with “Master/Slave” playing as the intro music over the P.A. The “Daughter” tag is parts of “To Come”, a monologue by Lenny Bruce. In the middle of “Not For You” just before the “All that’s sacred…” line, Ed sings “Check up on it” twice from Beyonce’s “Check On It”(!). “Inside Job” premieres at this show, with Mike playing a double neck guitar. My Morning Jacket joined in smashing tambourines during “Rockin’ in the Free World” and two of the band members did backing vocals with Jeff and Stone. At the end of the show, all of the band members were throwing guitar/bass picks and Matt his drumsticks as usual. Stone, though, started throwing out a lot of merchandise (hats, t-shirts, etc.) into the crowd. He didnt scrunch them up, so they didn’t travel that far into the crowd. One time he tried to toss it over his head backwards and it ended up only a couple of feet behind him, amusing those up front.