Main Set: Why Go, Last Exit, Corduroy, Severed Hand, The Fixer, Elderly Woman Behind The Counter In A Small Town, You Are, Amongst The Waves, Even Flow, Pilate, Unthought Known, Daughter/(ABitWp2), Johnny Guitar, Rats, I’m Open, I Got Shit, Glorified G, Out Of My Mind, Black, Insignificance, Life Wasted

2nd Encore: Whip It, Got Some, Crown Of Thorns, Satan’s Bed, Sweet Lew, Do the Evolution, Better Man/(Save It For Later), Smile, Alive, Rockin’ In The Free World, Yellow Ledbetter/Star Spangled Banner

It’s been nearly 14 years since my first Pearl Jam concert in 1996, and I still remember it fondly. I’ll always remember Justin walking into the locker room asking who wanted to go see Pearl Jam just before the bus left for a soccer game on the road in Williamsville. The sudden lottery jackpot of a PJ ticket predictably kept more than a few of us on the team preoccupied during the game, and it showed in the result, losing by more than a few goals. I remember frantically trying to get coach to let me hitch a ride with Justin and Steve and failing because I didn’t have a note from my parents; finally getting a ride downtown from one of the other guys on the team. All of 16 years old at the time, my first concert surpassed all of my expectations going in, and holds a place in my memory as one of those transcendent concert-going experiences that shaped your youth and set you off upon your course to adulthood. 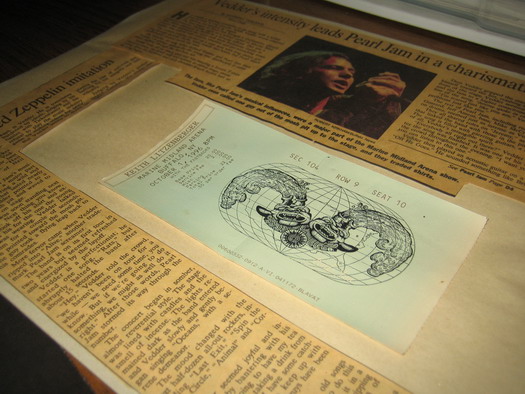 (Probably an exaggeration in retrospect; I’m sure I was still doing homework and playing video games the next day.)

While I’d been a fan of the band since I’d “discovered” them (along with a few million other teenage kids) in ’91 or ’92, it was that autumn night in downtown Buffalo that cemented Pearl Jam’s lofty perch atop my mental musical hall of fame, and I haven’t looked back. 16 shows later, I continue to be amazed by how easily my fanatic switch can be flipped by the music. I go through long spells where I barely listen to them when, suddenly, I’ll find myself loading up the car’s CD changer with six of their albums and cranking up the volume while I “sing” at the top of my lungs I should really try and record an isolation of my voice at one of these moments; I’m guessing the outcome will be both hilarious and horrifying. But I probably wouldn’t care – I still love the music enough to show it.

14 years and 16 shows later, I wasn’t all that confident I’d be able to make one of the shows on the 2009 tour in support of their 9th studio album, Backspacer; a relatively new job requiring 24×7 on-call duty had taken its toll, pushing “trivial” items like concerts and road trips to the back burner for more than a year.

It’s the memory of that first show in ’96; the opening show at the Garden in the summer of 2003 where the crowd noise literally shook the arena to its rafters; the limitless energy of a frenetic crowd in Montreal; the exhausted euphoria of a night back home in Buffalo in 2003; the communal gathering of fellow die-hards in Camden, NJ in ’06 and ’08. I remember vivid details of each of the 16 shows as if they were yesterday, and it’s those wealth of experiences that got me off my ass to get a ticket for the tour’s final stop in the U.S. in Philadelphia.

I gotta say, though, that enthusiasm was sorely tested by having to get up at 5am Saturday morning to get on the road for the 6+ hour drive to Philly. Not my favorite part of the trip, so I’ll breeze right past it, pausing only to note that Google Maps and Philly do not go well together. I’m pretty sure Pennsylvania’s made every effort to sabotage the online directions website by removing road signs or moving roads altogether. Throw another 90 minutes onto the drive. 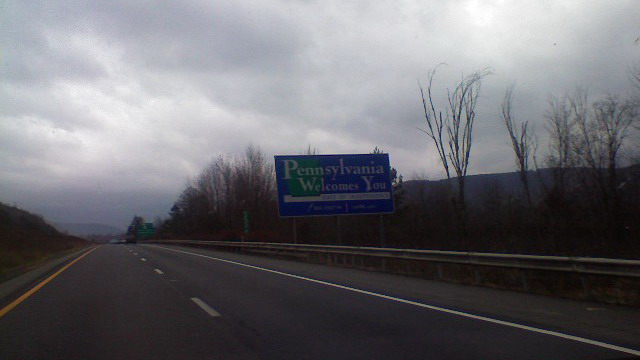 For all I knew, I was entering Delaware

Thankfully, traffic wasn’t too horrendous; surprising, since Philadelphia was essentially the center of the sports universe that weekend. Flyers game at 1pm; Game 3 of the World Series at 7; Eagles vs. Giants the next day. I got into the city around 3:30 and crossed the Ben Franklin Bridge into Jersey to check into my hotel. Yes, the closest available hotel, since I procrastinated, was in Cherry Hill, NJ. Bizarrely enough, I walked into the lobby and ran into one of my college fraternity brothers; the odds of which I’d put at about 115,000 to 1. I briefly caught up with him, checked in, dropped off my stuff and headed back over the bridge (stopping to pay a hefty $4 toll) into downtown. 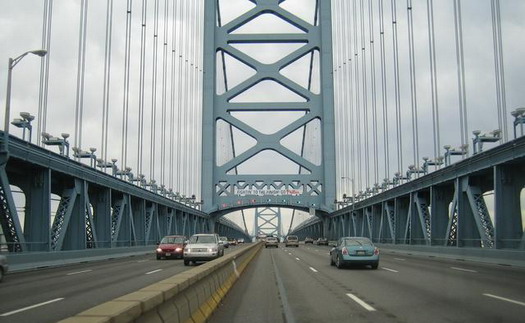 I wound my way through Chinatown and south on Broad Street toward the city’s sports complex. There’s nothing quite like it – all of Philly’s major sports venues are within sight of each other on lots south of the downtown area. Lincoln Financial Field (Eagles), Citizen’s Bank Ballpark (Phillies), Wachovia Center (Flyers & Sixers), and the Spectrum (former home of the Flyers with a rich history of unforgettable concerts). Pretty amazing setup.

Even more amazing was that I only sat in traffic for 10 minutes and paid an unbelievably low parking fee of $12. Really puts the $25 I spend to park for the soul-sucking, stab-me-in-the-face-a-thon every Sunday for the Buffalo Bills “experience” in perspective.

Pearl Jam shows in Philly (and nearby Camden, NJ) have served as a semi-annual gathering of fellow PJ message board devotees, growing in size each tour. Yes, I freely admit this is, at best, an incredibly dorky aspect of my personality and, at worst, weird. Fret not, the folks I’ve befriended over the years love to drink, tailgate and talk shit just like the rest of you “normal” people. Getting over the traditional awkwardness of having to talk to your Internet friendz (aided by Yuengling and randy lasses from Australia and West Virginia), we all quickly got over it and traded stories before heading into the Spectrum for it’s final send-off. (This will likely be the first and only time I use the term, “randy lass.” Hope you enjoyed it.) 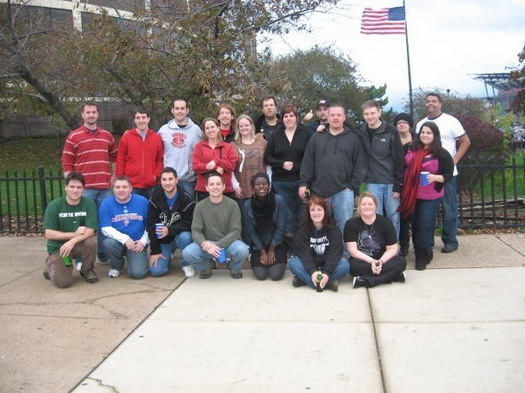 Internet: Serious Business.
(thanks to Jombi for the pic)

Read more about the place here. 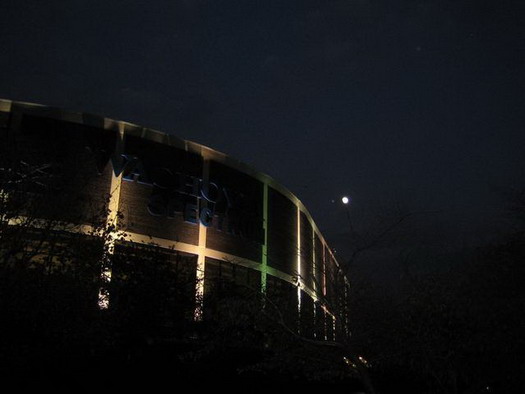 Entering the arena, I was amazed by its small size – I couldn’t quite get my head around how they could fit a hockey rink in there – but it must’ve been, like Memorial Auditorium in Buffalo, an amazing place to watch a hockey game. 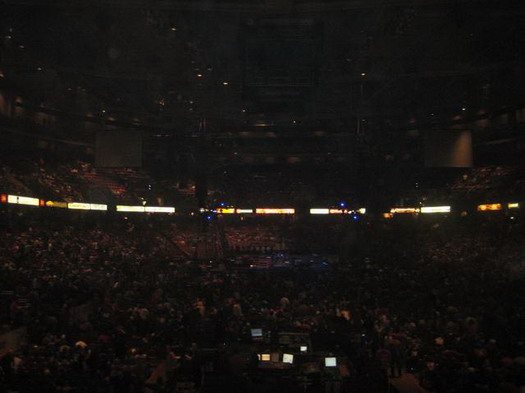 We had spent too much time socializing to see the opening band, Bad Religion, but I managed to grab their setlist nonetheless. 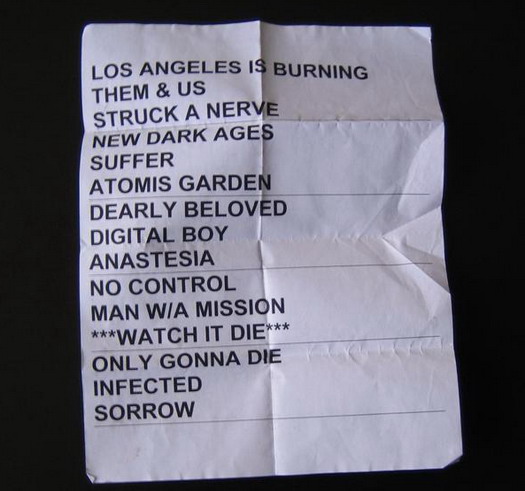 The show itself. Rumors leading up to this final show of a 4-night stand had everyone from Green Day to U2 to Bruce Springsteen joining the band onstage for what was sure-to-be a 5-hour marathon show in which the band played the entirety of The Beatles’ White Album. Alas, we had to make due with the greatest live band working today flying solo instead.

I’ve done enough of these reviews now that you can guess I’ll use plenty of adjectives like “raging,” “unbelievable,” “frenetic,” “rocking,” “pulse-pounding,” and “frenzied” to describe the band’s playing. You’ve had enough of that, and I won’t dwell on a blow-by-blow of each song here – rest assured the band was on, Ed was quickly drunk on vino, and the crowd was singing at the top of their lungs. I’ll post some links to notable reviews at the end of mine. A few highlights instead:

The night was capped off with another round of tailgating and cheese-tossing before a group of us headed back uptown to “party” in a hotel room until about 4:30am. “Party” = shouting, warm beer, getting lost in hotel hallways, and everyone about ready to pass out. I dropped some folks off and headed back into New Jersey to catch a few precious hours of sleep before making the drive back to Buffalo.

The outro music playing over the P.A. as we left the Spectrum was “High Hopes;” somehow appropriate for this venue and this band and this city. Hopes for another arena that can match the Spectrum’s history; hopes for a Phillies victory; hopes for another decade or two of music from a band that’s weathered the forces of time and age. Like many others in attendance Halloween night in Philadelphia, I’ll be right there with them until the eventual ride off into the sunset. 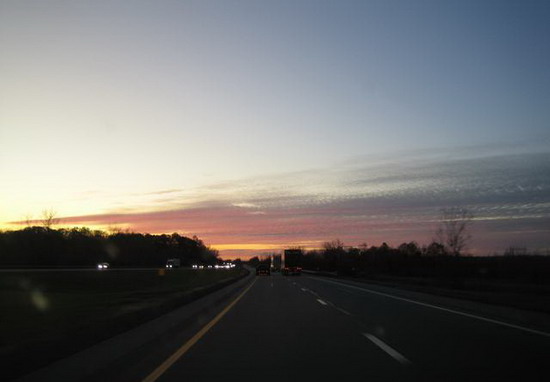