It’s not a show you can just pick up in midstream in a later season; it requires you to start with episode 1 of season 1 and make a commitment to give it a chance. Even after three or four episodes of that first season, you might be thinking I’m nuts for thinking it’s the best show ever. I didn’t come to my eureka! acceptance of the show as being on that level until episode 5 or 6. It’s not that those first few episodes are bad, on the contrary, they’re fantastic when viewed in the context of the series. It’s just that the viewer is introduced to so many seemingly-disparate plot threads and characters that it can border on sensory overload until you get in tune with the rhythm of the show.

I don’t remember where or when I first heard about the show, but I never gave the series much thought until ESPN sports columnist Bill Simmons started mentioning it in the majority of his columns, in the context of it being one of the best television shows ever produced. Having as much respect as I do for Simmons’ taste in popular media, I took a chance and downloaded the first season (take that HBO, the bastards who cancelled Carnivale, Deadwood and Inside the NFL!). It took me about a week to get through the first five episodes, which is about when I started getting irrationally jazzed about the thing and banged out the remaining eight in one marathon viewing session. I haven’t looked back and I’ll spread word of The Wire from the freaking mountaintop if I have to.

To consider The Wire with the rest of the less-than-stellar fare that airs every night in primetime is to do a disservice to the show; the series is too good and vastly more important than just about anything else on TV. Maybe I’m being melodramatic, but it’s not often that one feels this passionate about a TV show, for cripe’s sake. As much as I love Lost (this site pretty much keeps going because of it) I’d stop watching that show in a New York minute if I had to choose between the survivors of Flight 815 and The Wire. 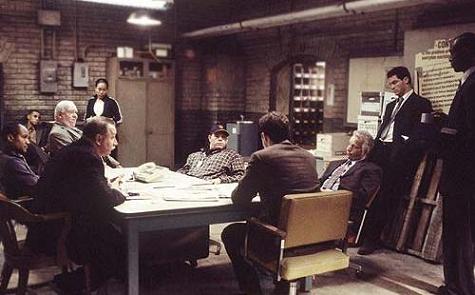 As I’m writing this, I’ve just discovered that the final episode leaked online four days early, so I’m having to fight the urge to close my browser and get to watching immediately. I’ll keep this short.

I’ll finish by taking you back to where I started, with the first post I ever wrote about The Wire, back in September of ’06. Rather than risk repeating the same things I said then, just go back and read what I wrote in two years ago; nothing’s changed. I have as much enthusiasm for the show now as I did back then, and I hope you take the time to discover and enjoy the epic series documenting the decay of Baltimore like I did–it’s well worth the trouble, my friends. And now I’m off to to the land of McNulty, Kima, Daniels, Bubbles, Carver, Herc, Lester “F**king” Freamon, Bunk, Omar, Marlo, Avon, D’Angelo, Stringer Bell, Frank Sobotka, Michael, Namond, Dukie, Snoop, Prez, Valchek, Ziggy, Bodie, Rawls, Bunny Colvin, Carcetti, and Clay “Sheeeeeeeeeeet” Davis one last time. I will surely savor it.

And now what are you waiting for? Go get the first season!