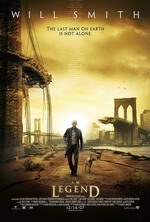 Lots o’ potential. Lots o’ cop-outs. The Hollywoodimazation of Richard Matheson’s semi-classic novel starts off surprisingly well before taking a turn onto Predictable Street in the town of ClichÃ©ville. The review from here on out will feature spoilers from both the book and the movie, so I urge you to stop reading and head…

Lots o’ potential. Lots o’ cop-outs. The Hollywoodimazation of Richard Matheson’s semi-classic novel starts off surprisingly well before taking a turn onto Predictable Street in the town of Clicheville. The review from here on out will feature spoilers from both the book and the movie, so I urge you to stop reading and head to your local Waldenbooks to pick up the novel. Take a day or two, read it, then decide if you want to drop the ten bucks on a flick that pales in comparison…but isn’t that bad.

Anyway, the first two-thirds of the film are very close in tone and plotting to the book, something I never expected going into it. and that makes it all the more disappointing that the climax and conclusion of the film veer off the tracks, favoring the cliched, “safe” choices studios make far too often. I’d give the audience more credit than they do. Theatergoers can deal with downbeat endings if they’re done well. The talent behind this project is skilled enough, to my eyes, to have pulled it off, but we’ll never know. Instead, we get an uplifting if somber “happily ever after” for the human race. 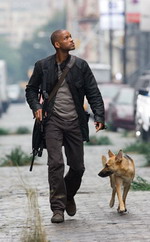 The premise is of the post-apocalyptic variety: a genetically-engineered virus designed to cure cancer mutates and ends up killing the majority of Earth’s 6.4 billion people, with the survivors made up of blood-thirsty mutants/vampires and a small group of immune individuals who are quickly dispatched by the overwhelming ranks of the undead. All save one Robert Neville; making him the last man on Earth. The film adaptation for Matheson’s novel has long been in the works, and has actually made it to the screen in two versions: Vincent Price in The Last Man on Earth, and The Omega Man, with Charlton Heston in the sole survivor role. The current, more “faithful” adaptation had long been attached to Ridley Scott and Arnold Schwarzenegger before it fell apart for budget reasons a few years back. While I’m not happy with the version of I Am Legend we did get in theaters, it could’ve been a hell of a lot worse with Arnold “GOO! NOW! GET TO DA CHOPPAAH!!!” Schwarzenegger on the marquee.

The film version of these “vampires” are depicted as one-dimensional, mindless animals instead of the more intellectual, coordinated disease-carriers in the novel. While the movie monsters in the film version are terrifying on a visceral level (which is realized through your typical “BOO!”-type scares), those in the novel were more terrifying because they had more than just numbers and ferocity on their side–they had intelligence equaling Robert Neville’s. And that intelligence meant that it wasn’t just Neville against a pack of monsters–it was Neville against evolution. He was the last of an extinct race; the last of one iteration of human evolution that made way for the next, in the form of humans genetically altered by a super-virus. They may have been cursed with a thirst for blood and an aversion to sunlight, but they were in the process of adapting and reconstituting “human” civilization. Despite the film making the vampires mindless monsters, there were subtle hints throughout the film that they may be smarter than we were seeing early on. Unfortunately, that thread leads peters out in favor of ravenous hordes of zombies on the attack.

Another knock on that approach to the infected is that they’re all rendered in CG, and it’s not that great. I’ve seen better effects work in movies with much smaller budgets. It’s hard to be truly scared of something that looks like a cartoon (albeit a scary one) jammed into the middle of a live-action movie. I’d like to ban CG from movies for a while; it’s becoming a crutch for too many filmmakers. (Look no farther than the three Star Wars prequels for the worst example of filmmaking laziness supported by bloated computer graphics.) It’s all about the characters, people.

Speaking of characters, there aren’t many in this film, and thus much of the responsibility for the its’ success or failure fall on Will Smith’s shoulders. As much as my preconceptions dictated that Smith was a poor choice for Neville, he delivered an exceptional performance here. It’s easy to lose sight of how talented some of the big-name actors are when they’re featured as larger-than-life mega-gods by the Hollywood hype machines. There’s a reason Smith makes a ton of dough, however: he can deliver the goods when he’s got good material to work with. Those preconceptions of mine were a stumbling block to my enjoyment of I Am Legend that Smith quickly took care of early on. Unfortunately, the screenwriter (and studio) trampled the goodwill he created by fitting the movie with a tired, cliched ending.

I also knock significant points off for no “Come out, Neville!”