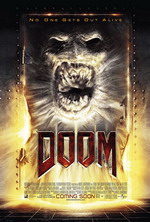 Aliens came out in 1986. 20 years later, evidence of the movie’s impact is still readily apparent in film today. The old Hollywood precept of milking a good idea for all it’s worth holds true in movies like Doom. The film centers on an elite group of Marines–commissioned by a multi-national conglomerate–sent to an inhospitable planet to rescue scientists and retrieve important scientific data. Along the way, things don’t exactly go as planned and our heroes are confronted with unspeakable horrors as they fight their way out of “hell.” More or less the same plot as Aliens, yes? The main difference is that Aliens is an original, finely-crafted film classic (at least, it is to me) and Doom is a poorly-conceived retread that fails to realize what made Aliens work: the characters.

In Doom, we’ve got the one-dimensional stereotypes filmgoers have become accustomed to: the tough guy leader who’s seen it all (The Rock), the conflicted hero (Urban), the scared kid on his first mission, the big dude with the big gun, some nameless cannon fodder, and the crazy guy you can’t rely on. That’s pretty much the formula these days, though it may be too much to ask for some decent characters in a movie based on a videogame. 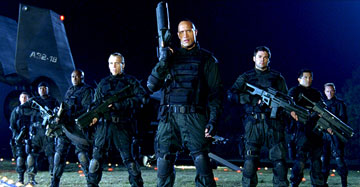 So I’ve essentially taken two paragraphs to say that Doom is “meh.” The production values are pretty good, and the direction is decent. The acting is passable, though The Rock’s performance is more befitting the wrestling ring than celluloid. But what starts out as a relatively interesting plot (thanks to Aliens) in the first half of the movie rapidly turns into a cliche-ridden music video once the proverbial shit hits the fan. Fans of the videogame will no doubt be tickled with some of the direct references to the game (the BFG, the FPS sequence, etc.), and Doom has its moments. Me? I’ll file it under the “wait to watch on cable TV” category. I’d like to note that the “multi-national conglomerate” in the movie appears to be AOL. I guess they’ve been up to more than just dumbing down the world’s Internet-goers. Who knew?