One of the classiest individuals ever to wear an NHL jersey, let alone a Buffalo Sabres jersey, had his #16 retired at an HSBC Arena ceremony prior to last night’s Sabres-Leafs game. Forward Pat LaFontaine played in Buffalo from 1991-1997, not exactly a decade-spanner that you’d think a player would have to have to get his number retired. But in his time here, no one carried himself with more class, respect, and integrity than Pat did. Nevermind his unbelievable ability on the ice; it goes without saying that he is one of the greatest players in NHL history. His induction into the NHL Hall of Fame a few years ago is proof enough of that.

What really stands out about LaFontaine is the respect he had for his community. He was extremely active in the Buffalo community, founding the “Companions in Courage” organization, helping sick kids with their treatments, and perhaps more importantly, helping them maintain a postive attitude. Many of the kids affected were invited onto the ice last night, all wearing #16 jerseys. Pat gave a–you guessed it–classy speech, thanking everyone from former Sabres owners Seymour and Northrup Knox to the equipment manager who sharpened his skates. A great night for the Buffalo Sabres and the community. That arena is a better place for having that banner hanging inside. 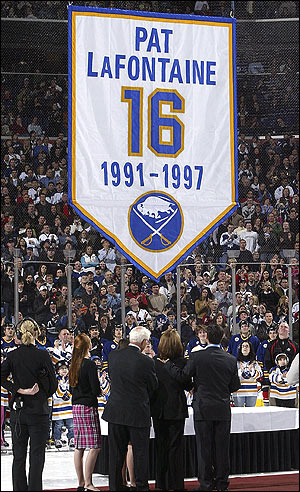 I should also mention the game itself. The Sabres skated the Leafs right out of the building, winning 6-2, featuring a hat trick by #8 Derek Roy. Toronto took countless dumb penalties, looked tired, and resorted to cheap shots as the game appeared out of reach. They’re going nowhere fast, and I’d imagine coach Pat Quinn could be gone soon as well, if the team doesn’t get their act together. I’m sure all the columnists in Toronto are on fire over the team’s play. Rack up another two points for Buffalo; Ottawa is squarely in the Sabres’ sights for the Northeast Division lead.