Bruce Springsteen and his E-Street Band graced a snowbound downtown Buffalo with a rollicking good time last Friday night, managing to unite fans of all ages in rock-n-roll euphoria for two hours of sheer enjoyment. A show like this makes me realize how much I’m missing out by focusing so intently on all things Pearl Jam. I’ve seen fourteen of their shows, all the while missing out on the other acts I love, even when they come into Buffalo. U2, Black Rebel Motorcycle Club, Neil Young, even Metallica. They’ve all played memorable shows in the area the past couple of years, and I’ve made the mistake of not attending any of them. No more!

Prior to heading into HSBC Arena, we parked next to a woman experiencing difficulty in getting her malfunctioning power window to slide up, precipitating Justin and I to try and use our combined might to force the window up. To no avail, I’m afraid. She thanked us for trying and we regretfully left her in the frozen wasteland of the parking lot with an open window. I feared she’d never get a chance to see The Boss.

Once into the shelter of the arena, we got to our seats just in time to hear the distinctive sounds of a calliope (yes, a calliope) herald the arrival of Bruce and his E-Street Band to the darkened stage. An unseen Springsteen shouted into the mic repeatedly, “Is there anybody alive out there?!!” with the crowd responding with raucous cheers signifying its’ eagerness to rock after slogging their way through snowpacked streets on the way to the show. The band kicked into gear as the lights blazed on with “The Ties That Bind,” which led into “Radio Nowhere,” the source of the “is there anybody alive” line and the first single off the new album, Magic. Springsteen’s still got “it” in his relative old age; I’ve had the album in my car’s CD player for a few weeks now. He’s no slouch onstage either, exuding the energy of someone twenty years his junior as he wails into the mic and runs around the stage. 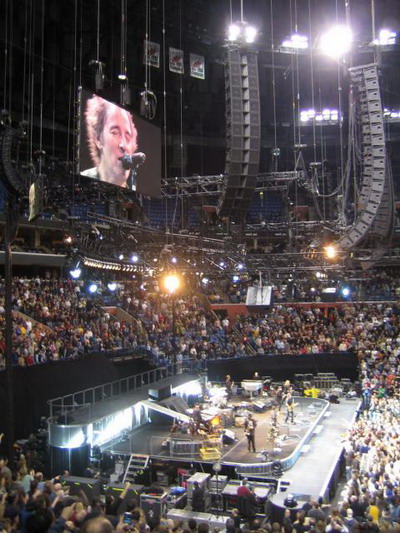 The rest of the main set was fast-paced and enjoyable, with highlights including a cover of Patti Smith’s “Because the Night” (although Springsteen’s a co-writer), and a intense and affecting “Devil’s Arcade”/”The Rising”/”Last to Die” triplet that gave the audience a chance to catch our collective breaths before he closed the main set with a blow-your-doors-off rendition of “Badlands.”

It’s a foreign experience for me not to be able to sing along to songs I know every lyric of (in the case of Pearl Jam), so it took me some adjustment to just listen to the songs I didn’t know, nevertheless enjoying them all. What one misses out on because of that unfamiliarity, however, are the “live rarities” that rarely, if ever, get played in concert. I have an innate knowledge of Pearl Jam setlists past, so if the band plays something new, I’m almost instantly aware of it, and start freaking out with the appropriate amount of blind fanaticism. Ahem. Not the case with Springsteen. Apparently, “Detroit Medley” (which included “Devil With a Blue Dress,” “Good Golly Miss Molly,” and other classic cuts) has become a very rare commodity in Bruce’s live shows, and he saw fit to grace Buffalo with it in the middle of the encore.

There aren’t many bands these days that can do justice to these “olden” songs, and it’s a treat to get to see it in person. Before I continue, a few quick observations about the show and the E-Street Band:

Oh, and remember that woman with the malfunctioning window? I think she got to enjoy Bruce after all. 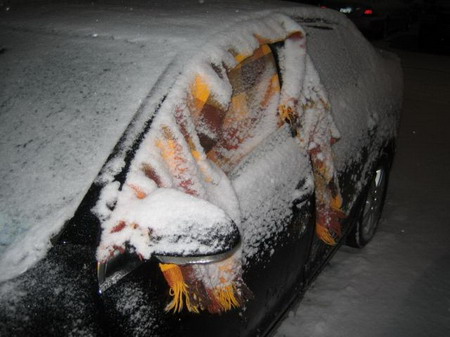